WATERHOUSE, BENJAMIN.  (1754-1846).  American physician;  co-founder and professor of Harvard Medical School; known for being the first doctor to test the smallpox vaccine in the United States, which he carried out on his own family.  [Following Edward Jenner’s research, he received the vaccine from England on threads soaked in cowpox lymph. Some time after vaccinating his children, he challenged them with smallpox and showed them to be immune. He went on to put great efforts into encouraging public vaccination, and effectively eradicated smallpox in the U.S.]  Very rare Autograph Letter Signed, “Benjn. Waterhouse”.  One full page, quarto.  Cambridge, January 5, 1799.  Very fine condition.  Addressed on integral address leaf to the “Honble. Christopher Grant Champlin, Member of Congress in Philadelphia”, with a straight-line “Boston” and “Free” postal markings.  Waterhouse writes:

“Dear Sir, The main object of this letter is to request your interest for my friend George Waterhouse who has concluded to enter the army provided he can get a commission.  Mr. Jones introduced him to General [Henry] Knox [US General in Revolutionary war] who said he would engage that he should have a lieutenancy.  General Knox accordingly forwarded his recommendation with the rest, but Mr. Jones has just suggested to me that I had better write to you on the subject and was of the opinion that you could and would do no small service by speaking a good word in favour of George.  I know not the channel through which influence of this kind passes as you do, but if you will be so kind as to say or do whatever you can towards ensuring him the commission in question, it would greatly oblige me and him.  General Knox appears very partial to George and spoke of his success with confidence but as there are so many applicants, I thought that your influence would go a great way towards rendering the matter certain.  Abraham passed through Boston yesterday, on his way to Portsmouth.  I am dear Sir, with great esteem your friend and humble servant, Benjn. Waterhouse.”

In 1799, a London physician and friend of his, Dr John Coakley Lettsom, [also a close friend of Benjamin Franklin’s] sent Waterhouse information on a vaccine that had been developed in England by physician Edward Jenner for smallpox. After receiving the vaccine from London, on July 8, 1800, Waterhouse injected his son, Daniel Oliver, his 2 daughters, Mary & Elizabeth, and two of his servants, Samuel Carter & Kesiah Flag with the vaccine.  It’s successful application had him soliciting the help of President Thomas Jefferson in the vaccine’s distribution, effectively stamping out smallpox in the United States. In 1802, the vaccine was given to Native Americans, helping them stem the spread of the disease among the tribes.

A boldly written letter from the time when the hand that held the pen in creating this letter, also held the medical instruments that performed the science of America’s first inoculations.  His letters are very rare.  A ‘must get’ for any collector of medical or science related material. 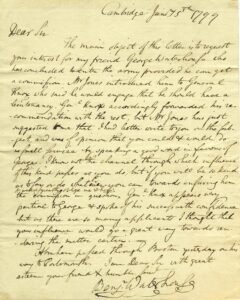 CHAMPLIN, Christopher Grant,  was a Representative and a Senator from Rhode Island; graduated from Harvard College in 1786 and continued his studies at the College of St. Omer in France; elected as a Federalist to the Fifth and Sixth Congresses (March 4, 1797-March 3, 1801); elected as a Federalist to the United States Senate to fill the vacancy caused by the death of Francis Malbone and served from June 26, 1809, to October 2, 1811.