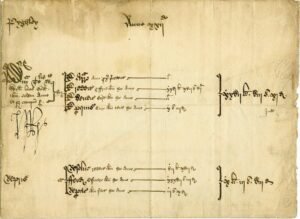 HENRY VII.  (1457-1509).    First Tudor King of England. Extremely-rare Manuscript Document Signed, as King, with his monogram ‘HR’, in Latin.  Two full pages, folio.  “Bawetre [Bawrtry], 22nd year of Henry VII [1506-1507]. Henry has signed his monogram at the upper left part of a series of accounts, and under specific entries specifying sums passed to John Heron, the General receiver of the King’s Revenues, has added “ad usum domini Regis,” the words “computatur hoc anno” [it is accounted for this year]. The frequency with which Henry VII signed or annotated accounts has not failed to arouse comments. The Public Records Office Museum Catalog, which describes the Book of Receipts of the Treasurer of the Kings Chamber for 1489-1495, notes: “The care with which Henry VII examined each item in this and other similar books in the in the Public Office illustrates the character popularly assigned to him.” But in S.B. Chimes’, Henry VII, he notes: “The notion that his chief leisure occupation was initialing accounts of his income becomes and absurdity when it is seen how he spent substantial portions of that income …” Toward the end of his reign, during the period of this document, Henry was annotating far less than earlier in his reign. Very fine condition.  A remarkable survivor of history, and only the second time we’ve offered his autograph.