ELIZABETH I.  (1533-1603).  Queen of England and Ireland;  only child of Henry VIII and Anne Boleyn; sometimes called “the Virgin  Queen”; last of the Tudor monarchs; promulgated the Thirty-nine Articles and obtained from Parliament (1563) extension of the provision of the Act of Supremacy, rendering Protestantism and patriotism synonymous in England;  found in her rival, the Roman Catholic Mary Stuart, Queen of Scots, a power struggle which only fell in Elizabeth’s favor after Mary’s defeat at Langside;  imprisoned Mary at Carlisle, thus giving rise to plots for liberating her;  signed her death warrant (1587) never having met face-to-face; her 45 year reign is considered one of the most glorious in English history.   Rare Manuscript Document boldly Signed “Elizabeth R”, as Queen at upper left. One page, oblong folio, vellum, in Latin and Olde English. No place, February 8, 1588.  Countersigned by William Cecil, 1st Baron Burghley, as Lord High Treasurer, and leader of her Privy Council.   He was a chief advisor to ERI for over 40 years and served as her Secretary of State on two occasions.  It was he, who urged for Mary, Queen of Scots execution.   Usual folds, and a few pin holes, with very minor soiling around edges, [for a 430+ year old document!], else fine condition   The document reads, in part:

Elizabeth’s signature measures over 5 inches in length!   Just a fabulous opportunity to add one of the great names of history  to your collection! 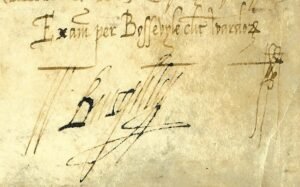