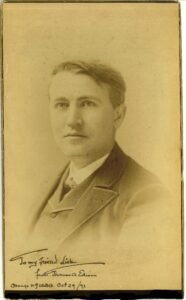 THE VICE-PRESIDENT OF THE EDISON ELECTRIC ILLUMINATING COMPANY

EDISON, THOMAS A.  (1847-1931). American inventor of the phonograph and the light bulb.   Very rare, superb, imperial cabinet Photograph Signed and inscribed:  “To my friend Lieb / from Thomas A. Edison, / Orange NJ  USA Oct. 29, 1891.”  Huge 7 ¼ ‘ x 11 ¾’ inches, [image size].  Mounted to a slightly larger original photographer’s mount [7 1/2 x 12 inches].  [We know that this image is by Falk Studios, with Benjamin Falk most likely the photographer, of NYC, taken at his Broadway studio].   Some loss to lower photographer’s mount, and very minor marginal chipping to mount edges, else very fine condition.  Falk was a photographer of major significance.  He was to make his name in adding arc lights in his studio for additional lighting, allowing photography sessions to occur into the late evening, when ‘working’ people could take advantage of this new technological process.

The recipient of this photograph was John W. Lieb.  Lieb, as a soon-to-be Steven’s Institute graduate, when he met Edison at Edison’s Menlo Park Labs in 1880.  He went to work for Edison in January of 1881, and was assigned to Edison Machine Works, where he worked on designing the generators for the Pearl Street, NYC, generating system.  When the station opened in 1882, Lieb was placed in charge.  He was then sent to Italy to electrify Milan, and on his return, became the vice-president of the Edison Electric Illuminating Company.  The association between Edison and Lieb, was a long, and significant one.

We have seen just 3 [and have owned all 3, at some point] of these large Imperial cabinet size photographs of Edison in our nearly half-century of dealing in the best of historical materials.  They were all inscribed to major players in the scientific / electrification of the world sciences and invention world.   Just a superb item.  We always advise our clientele to buy ‘the best’ out there, as in our experience, you’ll never go wrong!   In our opinion, this is one of those opportunities.