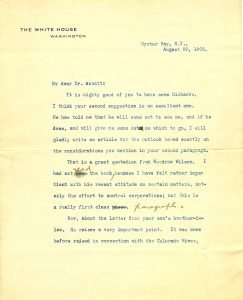 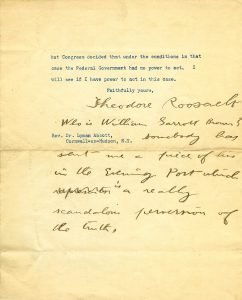 “THAT IS A GREAT QUOTATION FROM WOODROW WILSON… I HAVE FELT RATHER IMPATIENT WITH HIS RECENT  ATTITUDE ON CERTAIN MATTERS, NOTABLY  THE EFFORT TO CONTROL CORPORATIONS.”

“It is mighty good of you to have seen Richards. I think your second suggestion is an excellent one. He has told me that he will come out to see me, and if he does, and will give me some date on which to go, I will gladly write an article for the Outlook based exactly on the considerations you mention in your second paragraph.  That is a great quotation from Woodrow Wilson. I had not seen read the book, because I have felt rather impatient with his recent attitude on certain matters, notably the effort to control corporations; but this is a really first class piece paragraph. Now, about the letter from your son’s brother-in-law, He raises a very important point. It was once before raised in connection with the Colorado River, but Congress decided that under the conditions in that case the Federal Government had no power to act.  I will see if I have power to act in this case. Faithfully yours, Theodore Roosevelt.”

“Who is William Garrolt Brown? Somebody has sent me a piece of his in the Evening Post which is a really scandalous perversion of the truth.”

William Garrott Brown (1868-1913) was a Southern historian and author.  Brown had written a piece around that time accusing the President of abandoning the Republican Party in the South.  Perhaps this may have been the reference.  Just superb content, in a age where former President’s rarely, if ever, commented on the politics of their administration with the force or clarity exhibited in this letter.  It is perhaps the long friendship between Abbot and TR that makes such a letter possible.  Absolutely among the best of letters from T.R.’s presidency.