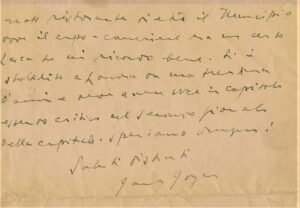 “Here is the response of Mrs. Hughes, the widow of my friend Herbert Hughes, musical composer and critic.  W.T. in the Daily Telegram.  Tomorrow, I shall write to [Ferruccio] Bonavia [violinist and music critic of the Manchester Guardian and Daily Telegraph].  Please wait two or three days until he can receive my letter, and then write him (including the page that I re-send).  …I will make an appeal to his sense of professional friendship and common-citizenship.  The fact that he has become a British subject should open the way a little.  I believe that Bonavia is related to the proprietor of a well-known restaurant behind the town-hall [in Trieste], the head waiter of which, is a certain Luca, who I remember well… He will settle in London a week from tomorrow and should have a voice in the chapter, being the critic of the second newspaper of the capital.  Let us hope, yours sincerely,  James Joyce.”

Joyce had offered to introduce his son, Giorgio, to officials of the B.B.C.  Giorgio, an unsuccessful singer, traveled to London in early June for an audition.  His audition at the B.B.C. was a failure.  His father afterwards wrote again to Rogers, expressing his anger and asking whether Rogers knew what had gone wrong: ‘So.  Giorgio has been ingloriously failed by the invisible jury of the B.B.C. …What the deuce did happen at that audition?’  (See Letters, III, p.450.)  The young James Joyce had himself given serious consideration to a career in music (he had a charming light tenor voice).  Indeed, according to Ellmann, in later years, Nora Barnacle was to remark: “Jim should have stuck to music instead of bothering with writing”.