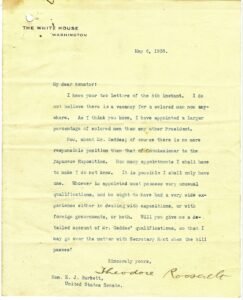 THEODORE ROOSEVELT ON RACE RELATIONS: “I HAVE APPOINTED A LARGER PERCENTAGE OF COLORED MEN THAN ANY OTHER PRESIDENT.”

ROOSEVELT, THEODORE. (1858-1919).  26th President (1901-1909), and first American to be awarded the Nobel Peace Prize (1906). Exceptional Typed Letter Signed “Theodore Roosevelt,” as President, on imprinted The White House /Washington stationary. One full page, quarto. Washington,  May 6, 1908, to Senator Elmer J. Burkett, of Nebraska, discussing various matters, including Roosevelt’s appointments for “colored men,” and foreign appointment suggestions put forth by Burkett.  Punch filing hole at top left, else very fine condition. Roosevelt notes with pride his African American appointments, and the qualifications required for Commissioner  to the Japanese Exposition to be held in New York in 1912.  As it turned out, the Exposition was postponed until 1917.  Roosevelt writes:

“My dear Senator: I have your two 1etters of the 5th instant. I do not believe there is a vacancy for a colored man now anywhere. As I think you know, I have appointed a larger percentage of colored men than any other president. Now, about Mr. Geddes; of course there is no more responsible position than that of Commissioner to the Japanese Exposition. How many appointments I shall have to make I do not know. It is possible I shall only have one. Whoever is appointed must possess very unusual qualifications, and he ought to have had a very wide experience either in dealing with expositions, or with foreign governments, or both. Will you give me a detailed account of Mr. Geddes’ qualifications, so that I may go over the matter with Secretary Root when the bill passes? Sincerely yours, Theodore Roosevelt.”.

The Japanese Exposition was of great import to Mr. Roosevelt, and he included the news of the postponement, and its importance in bridging cultural differences between the countries in his farewell address to America before leaving office in 1909.  As it turned out, the outbreak of World War I would see things differently.

Any presidential letter dealing with race relations from this period in our history is highly desirable, and T.R. was one of the earliest to face these issues head on, when he invited Booker T. Washington to dine with him in the White House in 1901.  One of our “Best of the Best” ™