“My dear Major, I am anxious that you should become well acquainted with my friend & successor Mr. Dudley. I am entirely confident that the result will be mutual confidence & esteem. Yours very truly, M.V. Buren /  Albany,  Jan 17, 1829.”

The War of 1812 awarded Hamilton his rank as Major.   A fine and attractive letter. 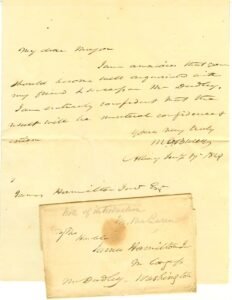