“Allow the bearer, Mr. Nash, to pass to Norfolk and report himself to Gen. Shepley –  A. Lincoln.”

“The above pass I consider good. Lew Wallace Maj. Gen. Am. Mid Dept.”

Both endorsements are penned on the verso of an autograph letter of introduction from JOHN W. MCCLURE, Assistant Quartermaster for the Department of the Gulf, on Office Assistant Quartermaster Department of the Gulf. One page, quarto. New Orleans. “March 22 1864.”  Addressed to General GODFREY WEITZEL [(1835-1884) Major General in the Union Army and acting Mayor of New Orleans during the Federal occupation of the city]. The document is a letter introduction for Mr. Nash. McClure writes, in part:

“General, Permit me to introduce to you Mr. Nash of this city. Mr. N[ash]. is going north and desires, if possible, after leaving New York to go to Richmond or near it to see his children. He desires from you a note to General Butler if you can give him one I know that he will not abuse the privilege in any manner as he is a loyal citizen …”

Nicely framed in a double-sided frame along with a small image of a beardless Lincoln to the right of Lincoln’s endorsement. [Not examined out of frame].  Some toning of McClure’s letter, and old stamp hinge reinforcements on verso, but Wallace’s and Lincoln endorsements are unaffected and boldly penned.  Just a choice association of names that are not often encountered together! 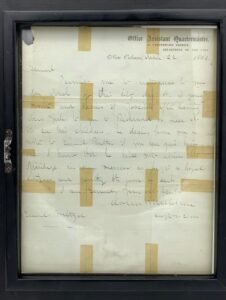