ADAMS, SAMUEL. (1722-1803). American patriot and Signer of the Declaration of Independence. Partially-Printed Document Signed, ”Samuel Adams”, as Governor of Massachusetts. One page, oblong folio. Boston. September 8, 1796. Countersigned by John Avery, as secretary of the Commonwealth of Massachusetts. The document reads, in part: ”By his Excellency Samuel Adams, Esquire, Governor and Commander in Chief of the Commonwealth of Massachusetts. To Levi Mead Gentleman. Greetings you being appointed Captain of a Company of the third regiment (first brigade) Third Division of he Militia in this Commonwealth … I do by these presents (reposing special trust and confidence in your Ability Courage, and good Conduct) COMMISSION you accordingly: – You are, therefore to carefully and diligently discharge the duty of Captain in Leading, Ordering and Exercising said Company …” Upper left corner absent, lightly affect Adam s signature and the first letter of his printed name. Framed in a simply black wooden frame. Unexamined out of frame, but fine condition, with noted faults. Mead was a descendant of Gabriel “Goodman” Mead who came from England and settled in Dorchester MA around 1635. Levi was the son of Matthew Mead and Martha Danforth of Billerica, MA. Levi married Betsey Converse in Boston, MA on 16 Sep 1782. In 1802, Levi was appointed deputy-sheriff for Cheshire County, and held this office for many years. 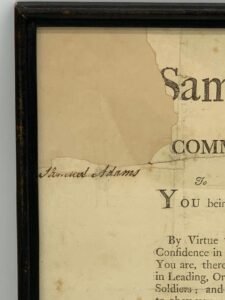