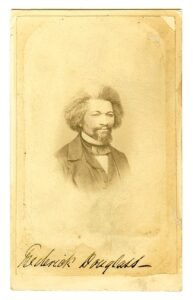 TAKEN BY ABOLITIONIST AND PHOTOGRAPHER —  JOHN HURN, WHO HELPED DOUGLASS ESCAPE TO CANADA, AFTER JOHN BROWN’S ARREST AT HARPER’S FERRY

DOUGLASS, FREDERICK.  (1817-1895).  The most prominent African American abolitionist, orator, journalist and antislavery leader of the 19th century.  Superb, and unquestionably extremely-rare Signed Carte-de-visite Photograph.  Douglass is depicted in a 4/5 full face, bust pose.  His intense gaze has him looking slightly to his left.  He is dressed in coat, waistcoat and tie.  Boldly signed by him, on the photographic surface, under his image, with his full signature: “Frederick Douglass”. No photographer’s imprint, but unquestionably from the studio of J.W. Hurn, Philadelphia, Pennsylvania.  Minor faults, but very fine condition.

John W. Hurn. (1823-1887) was born in England. He was a radical abolitionist. In 1859 while working as a telegraph operator in Philadelphia, he delayed the delivery of a telegraph requesting the Sheriff arrest Douglass after the news of John Brown’s capture at Harper’s Ferry, thus allowing Douglass enough time to reach an Underground Railroad Operator who shuttled him by train to Rochester, N.Y., then Canada and finally England.  Hurn was working as a photographer in Philadelphia by 1860, and operated a studio at 1319 Chestnut Street through the 1870s. He is known to have photographed Douglass, and this image resembles other known images of Douglass taken by Hurn in sittings done in 1862, 1866 and 1873.  We ascribe this image to the January 14, 1862 sitting.

WE CAN LOCATE NO OTHER SIGNED CDV OF THIS SPECIFIC POSE  —  IN ANY OF THE 65 MAJOR REPOSITORIES, THAT ARE KNOWN TO HOLD PHOTOGRAPHS OF DOUGLASS!

Couple this with the undisputed fact that any signed photograph of Douglass, is of extreme rarity, and thus we conclude: this item represents a truly once-in-a-lifetime opportunity to acquire a most remarkable signed photograph of this African American Icon.  One of our: “The Best of the Best.”™