A 1765 LOTTERY TICKET FOR THE RECONSTRUCTION OF FANEUIL HALL

ISSUED TO EDWARD PROCTOR, WHO LEAD A GROUP OF MEN ON THE NIGHT OF THE ‘BOSTON TEA PARTY’ TO DUMP INTO THE SEA THE TEA CHESTS SECURED ABOARD THE ‘DARTMOUTH’ WHILE SHE LAY MOORED AT GRIFFIN’S WARF IN BOSTON HARBOR

HANCOCK, JOHN (1737-1793)   President of the Continental Congress and of the Congress of the Confederation; Governor of Massachusetts; first Signer of the Declaration of Independence.  Scarce Partly-printed “Faneuil-Hall LOTTERY, No. Five” ticket, boldly signed “John Hancock”, at the lower center right. Oblong 16mo.  [3.5 x 1.75 inches].  Dated: Boston,  June 1765.   The ticket reads, in full:

“Faneuil-Hall Lottery, No. Five. The possessor of this ticket (No. 4171) is intitled [sic] to any Prize drawn against said Number, in a Lottery granted by an Act of the General Court of the Province of Massachusetts-Bay for Rebuilding Faneuil-Hall; subject to no Deduction’.

In colonial times, lotteries were used to finance public works projects, private constructions and other general enterprises, such as indicted here with the rebuilding of Faneuil Hall, the famous Boston marketplace and meeting hall that had been destroyed by a 1761 fire.   Many such projects were funded in this way, with participation being widely accepted by the public.  George Washington was responsible for “The Mountain Road Lottery” in Virginia 1767 which attempted to build a road through the Allegheny Mountains and to construct a resort in the area now known as The Homestead, Hot Springs, Virginia.

Edward Proctor was a prominent citizen and military officer of Boston, born in 1733. He was an importer of West India goods at the “Schooner” market on Fish Street. In addition to participating in the Boston Tea Party he was also an active patriot, was placed on the committee to obtain the resignation of the consignees of the tea, and he commanded the boarding party of the “Dartmouth” the night of the tea protest. In 1756, he joined the “Ancient and Honorable Artillery Company”, was a member of the committees of correspondence and safety, joined the St. Andrew’s Lodge as Freemason, was Junior Grand Warden of the Massachusetts Grand Lodge, acted as a firewarden, and as an Overseer of the Poor. He died November 1811 at the age of 78 in Boston. [Boston Tea-Party Museum, website].

Another ticket, which was only signed by Hancock, and without the significance and superb historical associations found in our piece, sold at auction in April 2021 just shy of $22,000.  One of our “Best of the Best”. ™ 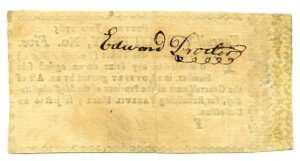