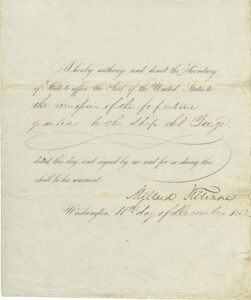 FILLMORE — AS PRESIDENT — AUTHORIZES THE AFFIXING OF THE SEAL OF THE UNITED STATES TO THE REMISSION OF A FORFEITURE FOR THE SHIP ‘ST. GEORGE’ — WHICH, JUST 2 WEEKS LATER, WAS LOST AT SEA, IN THE NORTH ATLANTIC, WITH A HEAVY LOSS OF LIFE!

FILLMORE, MILLARD. (1800-74). Thirteenth President of the United States (1850-3). Most unusual, Partly-Printed Document Signed, ”Millard Fillmore”, as President. One page, quarto. Washington, D.C., December 11, 1852. Very fine condition. The document reads: I hereby authorize and direct the Secretary of State to affix the Seal of the United States to the remission of the forfeiture granted to the Ship St. George, dated this day, and signed by me: and for so doing this shall be his warrant. Millard Fillmor . An interesting side note: On the 24th of November 1852, the St. George left Liverpool for New York, with a crew of 25, and 127 emigrant passengers, [mostly Irish, and of the very poorest class]. Her general cargo also included a quantity of naphtha and oil. Making her way across the Atlantic, she encountered heavy weather, and after being buffeted about for a month, on the 24th of December, was discovered to be on fire. The ship Orlando, captained by a Mr. White, came within sight, and immediately adopted measures for a rescue. Due to the heavy seas and the fires, only 76 people were rescued, with the remainder being lost at sea. The St. George was presumed sunk on Christmas Day. In our many decades of dealing with the finest of historical autographs, we can recall no other ”Authority to Affix” being used for a ship’s forfeiture remission.