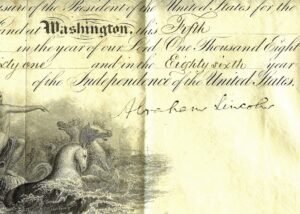 LINCOLN, ABRAHAM. (1809-1865). Sixteenth President of the United States (1861-1865). Superb and important partly engraved Document Signed, ”Abraham Lincoln”, as President. One page, tall folio, vellum. Washington, August 5, 1861. Countersigned by GIDEON WELLS, Secretary of the Navy. President Lincoln appoints WILLIAM BAINBRIDGE RENSHAW a Commander in the United States Navy. Accomplishment of text is dark and bold. The ink in Lincoln s signature, is a little skippy due to the nature of the ink he used, reacting with the oils of the animal skin [vellum], but very acceptable. Spread-eagle vignette at head with sailing ships in background; nautical vignette of flags and sea nymphs at bottom. Embossed green wafer seal of the Navy Department affixed at bottom center. After his promotion to the rank commander, William Bainbridge Renshaw was attached to Admiral David Farragut s squadron. Assigned to the steamer Westfield, a former ferry-boat purchased by the U.S. Navy from Cornelius Vanderbilt, Renshaw led a successful five boat assault on the Confederate held city of Galveston in October 1862. The Union remained in control of the port until the Confederate General John B. Magruder mounted a daring assault to recapture Galveston on January 1, 1863. At the start of the battle, Renshaw s Westfield, the flagship of the Federal naval forces off Galveston, ran aground on a sandbank while exiting the harbor. Under attack from two Southern warships, Renshaw, unwilling to surrender his vessel, ordered his crew to abandon ship and prepared to destroy the Westfield. Following a delay in the explosion, he and fifteen other Union seamen returned to investigate the cause. Tragically, the explosion occurred just as they prepared to board the gunboat, and all were killed. A Civil War commission with a fascinating story! Other than usual folds, the document is clean and fresh. Naval commissions are much scarcer than those for the Army, and high ranking appointments are nearly unobtainable. When buying a Lincoln commission, buy one with content and a story of the individual, in excellent condition. This piece checks all the boxes! 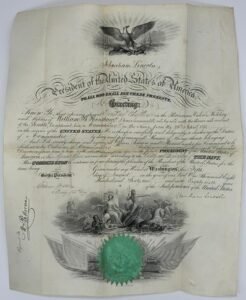 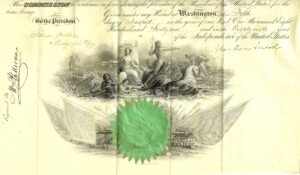