WRITING ABOUT THE SERIAL PUBLICATION OF OLIVER TWIST IN BENTLEY’S MISCELLANY  ~~  FROM HIS EARLY 48 DOUGHTY STREET, LONDON RESIDENCE  ~~  WHERE THE MANUSCRIPT WAS WRITTEN

The ‘48 Doughy Street’ location from where this letter was written is important, and is now the CHARLES DICKENS MUSEUM, which was Dickens’ home from 1837 – 1839.  Charles and his bride, Catherine, along with his sister-in-law Mary Hogarth, lived here a year after his marriage. It is the only surviving London house owned by Dickens, where he worked on his early tales. During this time, he would serialize Oliver Twist, to be first published in Bentley’s Miscellany, a British monthly magazine, starting February 1837, through April 1839.  Charles Dickens was its first editor. Oliver Twist first appeared in Bentley’s as part of his serial “The Mudfog Papers.” In this letter to Thomas Lydely, of the Worcester Herald, in which Dickens has stricken the word Herald, and replaced it with ‘Office’, Dickens remarks on the “Irish Tale,” which was presumably at Bentley’s, and alludes to plot details in upcoming issues of Oliver Twist. The letter in full:

“I write to you very briefly, to save the Post. I shall be very happy to avail myself of the Temptation which has only been delayed by a great press of matter, and which you will see at all – in the March Number, [The introduction of Monks] unless something extraordinary should occur to prevent it.

The “Irish Tale“ I should imagine must be at Bentley’s.  Depend on it that either his people or those at Peel’s have made some mistake. It was returned to one or another place from here, but my brother shall enquire into it. I shall be glad to receive the refusal of your papers, and am, Very Truly Yours, Charles Dickens.”

Oliver Twist would be the only work published by Bentley’s and because of disagreements with Richard Bentley, Dickens resigned his position as editor in February 1839. Bentley separately published Dicken’s Oliver Twist the year this letter was written with the title “Oliver Twist; or, The Parish Boy’s Progress, by Boz.”  What the ’Irish Tale’ Dickens refers to here remains elusive.   Letters written from this early period of Dickens life are almost unobtainable, and those with significant content and reference to his major writings at this time are even more so.  Just an exceptional letter. 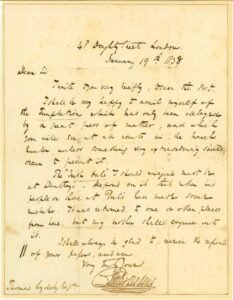