AN IMAGE OF PURE PRESIDENTIAL AND GOVERMENTAL POWER, BEARING THE SIGNATURES OF WHAT WERE TO BE THREE PRESIDENTS OF THE UNITED STATES, AND A FUTURE CHIEF JUSTICE OF THE US SUPREME COURT

HARDING, WARREN G.  (1865-1923).  Twenty-ninth President of the United States (1921-1923); died in office, resulting in Calvin Coolidge becoming the 30th President.  An impressive photograph depicting President Warren G, Harding’s first cabinet meeting in March of 1921.  Boldly signed by him and eleven of his cabinet members, two of which were to become future Presidents, and one who was to become the Chief Justice of the US Supreme Court.  The men are depicted sitting around a conference table in the White House, and each has signed beneath his image.    The photograph measures 11 x 14 inches, and is affixed on the photographer’s mount to an overall size of 13 x 16 inches.  Image by “Edmonston” with their signature, and copyright.  Neatly matted, and in a cherry wood frame to an overall size of 23 x 26 inches.   The signatories are:

Just a magnificent photograph, signed by a total of 3 Presidents, and a future Supreme Court Justice, [and not forgetting those several members who were also implicated in the “Tea Pot Dome” scandal!]. Excellent condition.   [Please note: the image is in very fine condition. The ghosts or shadings visible in the on line photos are due to being photographed through the glass frame.]  An image worthy of inclusion in any collection of Presidents or of important photography. 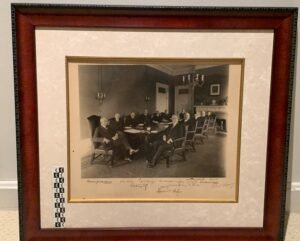