ONE OF THE RAREST SIGNATURES IN ALL OF SCIENCE!  —  SIR WILLIAM HARVEY  —  SIGNS A DEED OF TRUST FOR THE TRANSFER OF LAND HOLDINGS CALLED ‘BARON PARKE’

HARVEY, WILLIAM (1578-1657)  English Physician; made influential contributions in anatomy and physiology; was the first known physician to describe completely, and in detail, the systemic circulation and properties of blood being pumped to the brain and the rest of the body by the heart.  An impressive, and excessively rare Manuscript Document Signed, “Will Harvey”.  Additionally signed by:  “Edward Dering”; “Heneage Finch”;  [heneage finch, 1st Earl of Nottingham (1621-1682) Lord Chancellor of England, Solicitor General and member of the Convention Parliament of April 1660]; “Eliab. Harvey,” [Elizabeth Harvey, wife of Sir William Harvey]; “Jno Prestwoode”;  and “Henry Pratt”.  One page, jumbo folio, vellum.   509 x 755 mm.   July 10, 1651.  Six wax seals fully intact. 58 lines total.  Docketing on verso: “Declaration of trust for Baron Parke.”

The document is a land trust indenture between William Harvey: “Doctor of Phisick, Sr. Edward Dering … Heneage Finch … Elab Harvey, and Henry Pratt …[make an] assignment …[of] all that park of Baron comonly [sic] called Baron Parke … in the said county of Liecester …”

Following a medical education at the University of Padua, William Harvey returned to England, serving at a doctor at St. Bartholomew’s Hospital and as a Fellow of the Royal Society. Following his discovery of the circulatory system in 1616, Harvey published An Anatomical Exercise on the Motion of the Heart and Blood in Animals (1628). This groundbreaking work diverged greatly from an accepted model that dated to Galen. Instead of following a model that identified two types of blood, venous and arterial, Harvey, building a careful scientific base, argued for the idea that blood was pumped around the body by the heart before being returning to the heart and being recirculated once again.  Despite opposition and attacks, Harvey’s groundbreaking ideas were eventually accepted before his death. Even in the face of such controversy, Harvey served as personal physician to King James I and King Charles and also was the Lumleian lecturer at the Royal College of Physicians.

A fabulous and excessively-rare document containing a most remarkable assemblage of signatures from the 17th Century!  We were the original ‘discoverer’ of the document, found in a “Armada Chest”, hidden and largely forgotten, in a stable of Harvey’s distant heirs some 20 years ago.  Harvey’s autograph is excessively rare, with only a few examples appearing on the market, in the last 100 years.   This is a unique opportunity to acquire a scientific autograph many times rarer that Newton’s, and on a near par with Galileo’s. 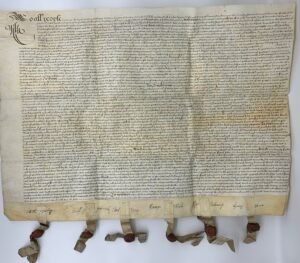 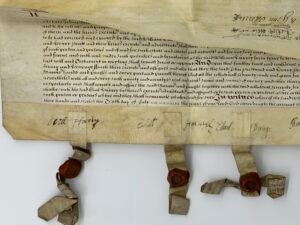