ROOSEVELT, THEODORE (1858-1919) 26th President of the United States; assumed the Presidency on the assassination of William McKinley.  Byron Andrews’ book entitled: Facts About the Candidate. [Theodore Roosevelt].  Chicago: Sam Stone, publishers. 1904.  Boldly Signed on the half title page: “Theodore Roosevelt”, probably as President.  A miniature illustrated campaign biography of TR, designed for the U.S. Presidential Election of 1904.  [It has been reported that these were tossed to crowds of probable voters at campaign rallies].  This miniature book measures: 2.25″ x 1.75″ inches, with original light blue pictorial wrappers.  Front cover portrait of Roosevelt, rear cover shows TR jumping a fence rail while on horse back at Sagamore Hill.  222 pages.  Over a dozen illustrations by A. J. Klapp.  This work is a portrait of Roosevelt’s public and private life meant to inform and educate the American voter.  Seven chapters cover the following subjects: I. Early Life; II. Author- Reformer-Assemblyman-Plainsman; III. In National Politics-Candidate for Mayor-Civil Service Commissioner – President of Police Board; IV. Waking up the Navy – With the Rough Riders in Cuba V. Governor of New York – On National Ticket; VI.  Vice President – Death of McKinley; VII. President and Candidate.  An appendix lists Electoral College votes by state. U.S. journalist and author Byron Andrews (1852-1910) worked as a private secretary to President Ulysses S. Grant on his tours of the West Indies, Mexico, and Cuba. By the 1880s, Andrews served as an advertising representative for newspapers such as the National Tribune, American Farmer and Boston Commonwealth. In 1884, Andrews accepted the position of editor for the National Tribune of Washington, D.C., of which he later became an owner. [Miles 869; Bondy, L.W. Miniature Books, pp. 143-144; Welsh, D.V. Bibliography of Miniature Books, 251].  While the book is not all that uncommon, signed copies are exceedingly-rare in our experience spanning six decades;  with this being the only copy we can recall seeing.   A choice item for the specialist in TR or the Presidential book collector. 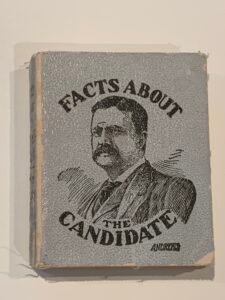 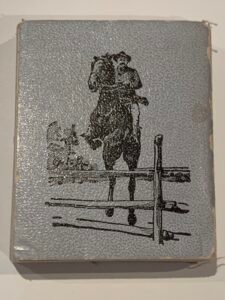