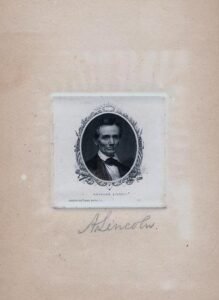 THE ONLY PRINT PORTRAIT THAT LINCOLN IS KNOWN TO HAVE AUTOGRAPHED

SIGNED EN ROUTE TO HIS INAUGURATION IN 1861

ONE OF THREE KNOWN COPIES

LINCOLN, ABRAHAM.  (1809-1865).  Sixteenth President of the United States (1861-1865).  Superb and extremely rare engraved Portrait Signed, “A. Lincoln”, on his way to his inauguration in 1861.  One page, octavo.   Lincoln is depicted in a full-faced bust pose, beardless.  Image engraved by the American Banknote Company, New York.

According to surviving records of the American Bank Note Company, six proofs of this image were sent to Lincoln in Springfield shortly before he left for Washington to attend the Inauguration.  On February 16, 1861, the inaugural train stopped in Buffalo, where Lincoln was claimed to have presented one copy to William M. Kasson, the man who designed the special railroad car in which the President-elect was traveling.  A second copy [our copy] was presented to J.R. Drake.  It bears the inscription by Drake on the verso as follows: “This portrait was presented to me in February 1861 during the journey to Washington, previous to his inauguration.  The signature is genuine.  J.R. Drake”.   [Our  image is fully documented in: The Lincoln Image / Abraham Lincoln and the Popular Print / by Holzer, Boritt and Neely, Jr.  / Scribners, NY. 1984  — page 31.  —  Please contact us for full details, and provenance.]  A third copy was discovered in 1976.  Thus, this is one of three known copies of which there can be only a total of six.  We’ve had 6 (or more) signed Lincoln photographs over the years, and know of maybe a dozen more.  This signed iconic image…is just a horse of a different color!    A remarkable artifact of the event, and an extremely important image.   In very fine condition.  Housed in a custom, full leather clamshell case.  A superlative item around which a collection, or an exhibition, could easily be envisioned!   One of our “Best of the Best”. ™