‘MONTY’ ACKNOWLEDGES THE CAPTURE OF ALL THE

“Dear Charles, Thank you very much for your letter of the 2nd September.  I was glad to hear from you.  I hope all the ‘doodle-bugs’ have now stopped, as we have occupied all the launching sites.  Patrick is doing very well in command of the 1st R Tanks.  [The following sentence written in Montgomery’s hand:] I saw him yesterday, looking very fit.  My best wishes to you all.  Yrs. ever, B.L. Montgomery”.

The V1 [Vergeltungswaffe 1 Fi 103/FZG-76] (known as the “Flying bomb”, “Buzz bomb” or “Doodle bug”, was the first modern guided missile used in wartime and the first cruise missile.  Called the Buzz bomb because of the characteristic buzzing sound of the engine, it caused considerable fear in targeted areas. People would listen for the missile approaching, but then be relieved when it could be heard overhead as that meant it had actually passed them. If the engine noise cut out, it was time to take cover, as the unpowered missile would go into its terminal dive and explode.

The V-1 was developed by the German Luftwaffe during the Second World War and was used operationally between June 1944 and March 1945.   It was used to attack targets in south-eastern England and Belgium, mainly the cities of London and Antwerp.  V-1s were launched from “ski-jump” launch sites along the French (Pas-de-Calais] and Dutch coasts until they were over-run by Allied forces. It was later complemented by the more sophisticated V-2 rocket.  The V-2 or Aggregat 4, launched from locations such as Peenemünde, Heidelager, and Heidekraut was the first long range ballistic missile to be actively used in combat. This huge German rocket hurled a one ton warhead 50 miles high and hundreds of miles down range to its target.

Letters from ranking Allied WWII officials mentioning, major weapons systems of this magnitude, rarely make it to the market, and in our 40+ years of experience in the field, this is the 1st letter we can recall seeing wherein Monty mentions these!  Very fine condition. 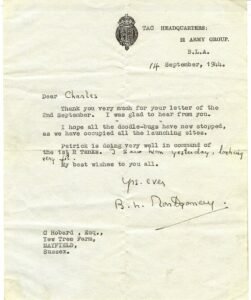