HYMAN RICKOVER, THE FATHER OF THE AMERICAN NUCLEAR NAVY ANNOUNCES THE COMPLEATION OF THE SEA TRIALS OF THE USS SIMON BOLIVAR, THE 31ST POLARIS SUBMARINE AND GIVES A STUNNING RECOUNTING OF THE EPIC LIFE AND NATURE OF THE SOUTH AMERICAN PATRIOT!

This ship is named for a great American soldier, patriot and statesman.  Simon Bolivar (1783-1830) was American in the broad sense of the word prevailing south of the border, where it is applied to citizens of the entire Western Hemisphere, north, central and south. Not only for us, but for all who share this vast continent with us, the word has a magic of its own.  It stands for what we have in common, what gives us a sense of belonging to the same family of nations, despite the fact that we differ in many important respects.  Not the least of the bonds uniting us is a revolutionary heritage that is peculiarly American.

What sets America’s wars of independence apart from other struggles for colonial emancipation is that they were fought for political liberty, pure and simple.  They were wars led in the north by Englishmen and in the south by Spaniards against men of their own race, language and culture who would deny them the righ to self-government.  The leaders of the revolt laid down their ‘lives, their fortunes and their sacred honor’ from motives of pure patriotism unadulterated by desire for personal advantage.  They were already successful and important men in their communities; they did not expect independence to enrich them or to enhance their status.  They fought for the idea of liberty at great personal risk.  None risked more and gained less personally than Simon Bolivar.

Born in Caracas, Venezuela—the year England recognized the independence of the United States—the son of a wealthy and aristocratic Spanish family long settled in the colony, Bolivar was educated abroad and, until the age of twenty-seven, lived the pleasant life of a rich planter.  But from the moment of the first revolt in Caracas against Spain in 1810 to the end of his brief life of but forty-seven years, Bolivar served almost continuously as leader of the revolt.  He richly deserved the title Liberator bestowed on him by his countrymen, for he succeeded in driving the Spaniards from the vast area now occupied by the republics of Panama, Colombia, Venezuela, Ecuador and Peru.  At one time or another he was not only military leader but civilian chief as well of one or more of these republics; for a brief time all were united under him.

The Hispanic-American wars of independence lasted twice as long as did our own, and were fought over a vastly larger area and more intractable terrain.  In population, the adversaries were more evenly matched, there being eleven million Spaniards to fifteen million colonials, while we had but a third as large a population as England.  Spain at the time was weakened by the Napoleonic Wars while England was the premier maritime empire of the world.  On the other hand, the Spanish colonials had to fight with no outside help except for individual volunteers who flocked to Bolivar’s army as they did to Washington’s.  No major country gave aid as we received from France.  Only little Haiti, under President Petion, supported the cause of freedom by giving men and material to Bolivar at a time when he sorely needed them. Of his military feats, Thomas Carlyle said that Bolivar rode ‘fighting all the way, through torrid deserts, hot mud swamps, through ice-chasms beyond the curve of perpetual frost—more miles than Ulysses ever sailed’.  He ‘marched over the Andes more than once, a feat analogous to Hannibal’s and seemed to think little of it.  Often beaten, banished from the firm land, he always returned again, truculently fought again’.

Henry Clay called Bolivar the Washington of South America.  Indeed, there are striking similarities, but the differences in temperament and in the turn of their lives are equally great.  Both were self-taught soldiers.  Bartolome Mitre, famed Argentinean statesman, journalist, author and historian said that though Bolivar ‘had no military education, he possessed the talents of a great revolutionary leader and the inspiration of genius… He formed his plans quickly and executed them with daring resolution, while he lost no time in securing the fruits of his victory’.  And, speaking of his reconquest of Western Venezuela, he remarked that ‘never, with such small means, was so much accomplished over so vast an extent of country, in so short a time’. Like Washington, Bolivar had that quality without which no man becomes a great military leader—a capacity to bear adversity with fortitude and to rise from defeat to win victory.  His Spanish adversary General Morillo said that Bolivar was ‘more fearful vanquished than victorious’—just as of Washington one might well say that his finest hour was Valley Forge.  Both cared for the welfare of their troops and were generous toward them.  Both in their lifetime received much public adoration, both have a secure place in history as liberators of their nations.  A South American republic was named for Bolivar, an American state for Washington.

But, while Washington remained popular and died venerated by his countrymen on the estate he loved so well, Bolivar lost the support of his people and died penniless of a lung ailment which might not have proved fatal had he spared himself.  Toward the end he was discouraged and said that ‘those of us who have toiled for liberty in South America have but plowed the sea’.  Hendrik Willem Van Loon, in his biography writes an epitaph that is more just.  ‘If those words, spoken in the bitterness of his final defeat and loneliness, had truly been the summing up of his restless labors, the life of Simon Bolivar might well have been considered a hopeless failure.  Whereas a single glance at the map of the southern half of our continent proclaims the glory of his achievements.  Half a dozen free and independent nations, arisen from among the ruins of Spain’s imperial ambitions, are surely a monument of which any human being might well feel proud.’  Respectfully,  H.G. Rickover”. 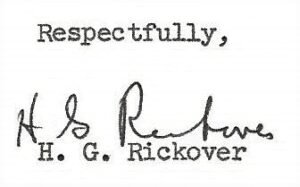