THE PIONEER BOTANIST, AND AGRICULTURALIST — LUTHER BURBANK — RECALLS READING THE ”YOUTH’S COMPANION” WHEN NINE OR TEN YERAS OLD AND LAMENTS HE HAS LITTLE TIME TO WRITE ARTICLES FOR THEM, NOTING: ”THE MAKERS OF HISTORY SELDOM WRITE IT”

“My Dear Sir Your esteemed letter of 1-10-05 received. As you judge we have been absolutely snowed under for several weeks with letters from all the prominent magazines, newspaper and book publishers throughout the United States, England and France asking for material. The house has been full of Editors, Reporters etc. for weeks. Three years ago, I promised the Woman’s Home Companion an articles on How to produce new flowers, and even at this time I have not had a moment’s time to write it, and have made no other promise since, but you place the mater in such a light, and as I took the Youth’s Companion when I was only nine of ten years old, it being one of the inspirations of my youth, I feels as though I would undertake to write both articles, one for you and one for the Woman’s Home Companion, but I have to say that the makers of history seldom write it, and it will be very, very difficult for me to obtain time even to write a short article. This is as definite as I am able to write you just now. Very Respectfully Yours, Luther Burbank.” 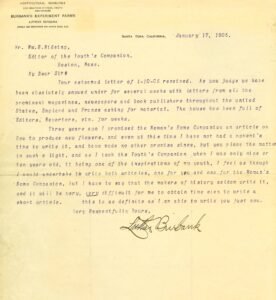