ADAMS, JOHN QUINCY.  (1767-1848).  Sixth President of the United States(1825-9); Secretary of State; diplomat and lawyer. Scarce Autograph Letter Signed, “John Quincy Adams”, while serving as Minister to Prussia, in his father’s [John Adams’] administration.  One fairly full page, quarto.  Berlin, May 31, 1800.  Integral address leaf on verso, bearing manuscript postal cancellations and an exceptionally fine impression of his red wax seal.  To Joseph Pitcairn [(1764-1844).  American diplomat, who at this time, was the American consul to the city of Hamburg].  Adams writes:

“Dear Sir.  I have received your favour of the 27th inst: – That of the 20th with the letter from my brother, you will find had already come to hand, as I mentioned in the enclosure of a letter to you by the last post. I am much obliged to you for your kindness in procuring the bisquits [sic] and the wine; Col. Swan when he was here mentioned that you had some fine tea of which you could dispose – If you have any of it left, and would let me have a dozen pounds of it, I should be glad.

I have so great a regard and esteem for Mr. Rogers, that even without your recommendation, nothing could give me greater pleasure than to have it in my power to serve him; and if not the pleasure of knowing him personally, I should feel the same disposition, to serve any person with a recommendation from you – But with regard to the office of Consul at Bordeaux,  I have already been requested by another Gentleman for whatever my recommendation could be worth, and have given it some months ago. I enclose a letter for my brother, and remain, Dear Sir, ever yours  John Q. Adams.”

It is often difficult to determine which of the Adams’ was/is the most fascinating American.  John, John Quincy, or Abigail.  —   At the age of 27, in 1794, George Washington appointed J.Q.A. as U.S. Minister to the Netherlands, a significantly important diplomatic posting.  After the elder John Adams was elected President in 1796, he made his son Minister to Prussia (Germany).   Shortly before leaving for Berlin, John Quincy Adams married Louisa Catherine Johnson, whom he met in London (she was the daughter of the American consul there). Tragically, the couple would suffer the loss of three children – a daughter in infancy and two sons in adulthood – and by some accounts, the marriage was a largely unhappy match.  After John Adams lost the presidency to Thomas Jefferson in 1800, he recalled John Quincy from Europe; the younger Adams returned to Boston in 1801 and reopened his law practice. The following year he was elected to the Massachusetts State Senate, and in 1803 the state legislature chose him to serve in the U.S. Senate. He served in the Monroe administration, as Secretary of State, and was largely responsible for the framework of what was to become known as “the Monroe Doctrine”.  In 1824, he was elected President. After his defeat for a second term, he returned to Congress and was vocal in the anti-slavery movement.  He argued and won, in 1841, the case of the Amistad slaves in front of the US Supreme Court.   Seven years later, it was while delivering a speech against slavery on the floor of the House of Representatives,  that he suffered a stroke and died 2 days later.  To paraphrase Shakespeare in Hamlet: ‘we shall not look upon his like again’.

Letters from this period in Adams’ life are uncommon and the above would make a substantive addition to any Presidential set of autographs.  Very fine condition. 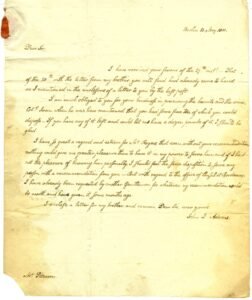 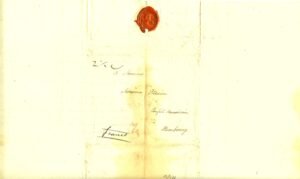