IN REACTION TO THE FINANCIAL PANIC OF 1834 BROUGHT ON BY THE IMMENIENT COLLAPSE OF THE BANK OF THE UNITED STATES, “IN ADOPTING THIS COURSE IS SOLELY GOVERNED BY A DESIRE TO PREVENT ANY FURTHER MISUNDERSTANDING OF HIS OWN VIEWS AS WELL AS HE IS TO THE SUFFERINGS AND WANTS OF ALL CLASSES OF HIS FELLOW CITIZENS”

“The President presents his compliments to the committee on behalf of the cabinet makers, pianoforte makers and other of the merchants in Philadelphia, and in reply to their communication asking for a personal interview for the purpose of stating verbally the views of the embarrassment under which they are alleged to be suffering at present, beg leave respectfully to repeat that he will be happy to see the committee…but that he cannot consent to hold any intercourse with the committee on the subject of their mission which shall not be expressed in writing.  The President in adopting this course is solely governed by a desire to prevent any further misunderstanding of his own views as well as he is to the sufferings and wants of all classes of his fellow citizens, or…by more anxious that the measures of the government may appear to be real and just and within the constitutional notice of the legislative power.  The President is, however, not aware that any views which neither he or the committee may entertain….will be less effectual if expressed in writing than presented verbally.  And as he is desirous of net being misrepresented he will therefore decline seeing the committee unless the communication is made in writing so that his answer may be made in the same manner.  Very respectfully, etc, etc.  Andrew Jackson”.

Thus early in 1834, Jackson was in the midst of his battle with the Bank of the United States, which he had refused to re-charter.  The Senate had passed various resolutions concerning his actions, but Jackson had succeeded in transferring government funds to various state banks, thus effectively ending the Bank of the United States.  A financial panic began to ensue, with the industrial and commercial houses in the Eastern and Mid-Atlantic states rapidly shuttering their operations. The State Banks, narrowed and heightened their requirements for loans, or called them in entirely.  The Bank of the US, in response, started to withdraw its notes from circulation, under the pretext that unless their charter was renewed it would be compelled to close by the end of March, 1836.  Under these conditions multiple petitions began to pour into the Congress and the White House.  Jackson knowing that these actions were the result of an artificial panic, deliberately created in part by Henry Clay and John C. Calhoun, refused to receive any petitioners, as evidenced by our letter.  This panic was short lived, as those State Banks whom Jackson had selected as recognized depositories, came to the ‘rescue’ of the money markets, and the ‘panic’ soon gave way to a revival of activity in the trades, industries and financial institutions.  By July 1834, the situation had largely resolved itself.   A fabulous letter documenting one of the critical points in our history. 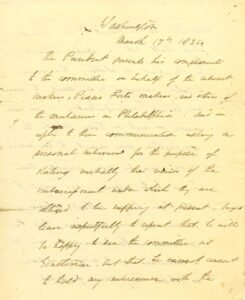 Proposed by Alexander Hamilton, the Bank of the United States was established in 1791 to serve as a repository for federal funds and as the government’s fiscal agent. Although it was well managed and profitable, critics charged that the First Bank’s fiscal caution was constraining economic development, and its charter was not renewed in 1811. The Second Bank was formed five years later, bringing renewed controversy despite the U.S. Supreme Court’s support of its power. President Andrew Jackson removed all federal funds from the bank after his reelection in 1832, and it ceased operations as a national institution after its charter expired in 1836. [history.com]