WREN, CHRISTOPHER (1632-1723). English architect, who played a leading role in the rebuilding of London following the devastating Great Fire of 1666, and whose St. Paul’s Cathedral takes a place among the greatest designs in the history of architecture. Scarce Manuscript Document Signed, “Chr. Wren.” One page, large folio. [9.75 x 15 inches].  No place [London]. March 11, 1698.  Countersigned by two other Hospital Commissioners — Lord Ranelagh, the Paymaster General, and Sir Stephen Fox. [Royal administrator and courtier to King Charles II, and a politician, who rose from humble origins to become the ‘richest commoner in the three kingdoms’; he was the principal force of inspiration behind the founding of the Royal Hospital Chelsea, to which he contributed £13,000.]  The document reads, in part:

“Whereas by an Abstract of the expense of provision in His Majesties Royal Hospital near Chelsea for the Month of February 1698. There appears to be due these following Summes …”

The document goes on to list by name the individuals involved and the various sums due to them.  They are the hospitals’: Butcher, Baker, Brewer, Cheese monger, Tallow-Chandler, Lampman and Steward.  Each of them has signed below the amount they have received.   A remarkable document within itself, for its revelations surrounding the workings of the Royal Hospital. Combine this with the added accomplishment of Wren’s involvement in running and revamping the institution and you have an extremely fine historical piece. 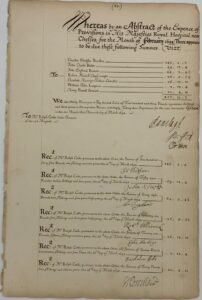 The Royal Hospital was founded by King Charles II, who authorized its construction in 1681 to offer care for old or injured soldiers of the monarchy. The acclaimed architect’s structure still stands. Wren’s design for the original building was intended to house 412 veteran soldiers and their officers, with additional part accommodating a Great Hall, chapel, kitchen, infirmary, and officers’ quarters. Work was completed in 1692, five years before Wren’s landmark St. Paul’s Cathedral re-opened. It’s worth noting that the financial theme of this document dates to a period in which the very existence of the project was threatened, as mismanagement and embezzlement by the paymaster-general appointed by King James II delayed construction and hampered the admission of patients. For his part, however, Wren saw to it that financial matters within his creation ran as smoothly as possible.