LEGENDARY PHOTOGRAPHER, ANSEL ADAMS DELIGHTS IN HIS NEW SINAR CAMERA EQUIPMENT AND DETAILS PLANS FOR ADAPTATIONS TO HIS CAMERAS WHILE RELATING ISSUES HE’S HAVING WITH THE NATIONAL PARKS SERVICE IN YOSEMITE!

“The SINAR is a magnificent piece of equipment! Just what I need to boost the New Spirit! !  I will come out about even when I dispose of a lot of stuff I have accumulated over the recent years! What a pile of things one can gather! I am going to do a lot with the 5×7 size; feel it can relate OK to the large print project, especially with the Pyro Devel.

Today I am a bit ‘thin’ — I had a major battle Sunday in my one-man war with the National Park Service. They have done enormous and unnecessary damage to Tenaya Lake with the construction of the new road, and I blew up like an Atom Bomb via wires. etc. and they demanded a meeting on the ground Sunday. I went. It was a tough day. — but I won the first round- nothing to be done now. but this should be an example of what NOT to do in the future. On the way to Merced Saturday afternoon the DKW engine pooped out (main bearing I think) and I had to get a rented car. On my way back to SF in the rented car a fan belt busted! Finally arrived!

The packs came this morning. I thank you. Only-they were packed very loosely and the carton “rattled”. I don’t think any damage is done. but perhaps they should be better padded in the future. Thanks for info. on the type 75 57 packs. Also thanks for info on the adapter Gerri was using. Will check. Am having a Graflox Back put on the 4×5 reducing back (for the 5×7 SINAR), built out sufficiently for the 4×5 Adapter. It appears that even with the 4×5 standard SINAR back. the Pol[orid]. 4×5 will not fit (there is too much apparatus at the top of the assembly). Better tell Rosy about this- I advise a 5×7 anyway. as there less flare from the larger bellows. The 8×10 is VERY costly!

Tell MMM I have received a nice letter from Dr. Miller (Palomar) and we will contact each other next week.

There is a reception for me tomorrow given by the Grollier [sic – Grolier] people, and 500 gursts [sic] are invited.  I am having as many of my good 4x5s in frames as I can gather put on the panels.  Maybe a large central picture, and a typical group of ‘Standard Adams’  —  wish you waz [sic] here!

Have a grand time at Nantucket!  Send on prints for APPERATURE when you can – would like to see you represented in it SOON.

I itch to get at those new 4x5s!  have not had any to work with, as you know!

**ADD TO SINAR COMMENT: the medial assembly allows for copying transparencies in accurate position on the camera ‘’bench’’;  a wonderful facility! At any time I can get the 8×10 back and bellows and it is entirely conceivable that the Sinar might do a lot of the work which my projected ‘professional copy device’ could accomplish.  I shall write a MEMO thereon when I have a chance to experiment!

** if there is a SINAR 4×5 in Cambridge try the 4×5 adaptor an let me know:  I could not find one here, but have come to my conclusions from looking at pictures of the 4×5 back and checking proportions with my 5×7 back.  MORE soon.  Best to you and all —– as ever  Ansel A—“.

Just a superb letter with the right mix of photography related content combined with his personal views on the direction his work was taking.  The letter is attractively matted and framed in a simple gilt wood, with a image of Adams. [On a personal note: in the late 70’s while walking across Harvard Yard, I ran into Mr. Adams, recognizing him immediately and asked what he was doing on campus.  He replied he was lecturing and that I should come by to hear him speak.  Well…I ran to the Coop [bookstore], and bought several images of his better know iconic works and his book.  When I saw him later, he gladly signed the book, but said his contracts forbid him to sign images of his work! – somewhere… here on a shelf, I still have the book, and… the unsigned images!] 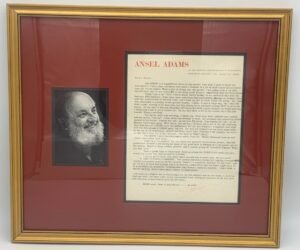 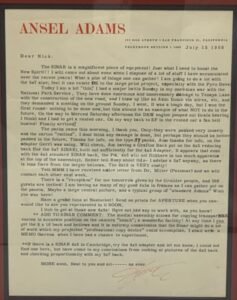