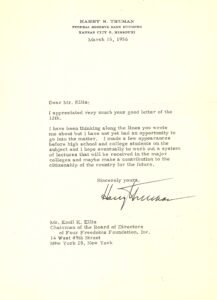 ‘I HOPE EVENTUALLY TO…MAKE A CONTRIBUTION TO THE CITIZENSHIP OF THE COUNTRY FOR THE FUTURE.’

TRUMAN, HARRY S.  (1884-1972).  Thirty-third President of the United States (1945-53).  Typed Letter Signed, “Harry S. Truman”, on his name-imprinted letterhead.  One page, quarto.  “Federal Reserve Bank Building, Kansas City 6, Missouri”, March 15, 1956.  Extremely fine condition.  To “Mr. Emil K. Ellis, Chairman of the Board of Directors of Four Freedoms Foundation, Inc., 14 West 49th Street, New York 20, New York”.  Truman writes: “Dear Mr. Ellis: I appreciated very much your good letter of the 12th.  I have been thinking along the lines you wrote me about but I have not yet had an opportunity to go into the matter.  I made a few appearances before high school and college students on the subject and I hope eventually to work out a system of lectures that will be received in the major colleges and maybe make a contribution to the citizenship of the country for the future.  Sincerely yours, Harry Truman”.