Superior example of the paper wafer seal of the Land Office affixed at lower left.  Some light toning to the vellum.  This land grant is not the usual one found in the autograph market.  The vignette of the grateful America/Columbia handing over the deed for the parcel to the retired soldier, while his son carries his sword indicating his duty as over, but still ready should he be needed again,  is especially fine.   These documents make fine display items. 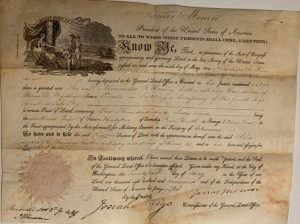