“Dear Sir,  [greeting supplied in Adam’s hand] –  I have received the letter you have this day done me the honour to write.   I congratulate you on your fortunate arrival in Boston and shall be happy to receive the honour of a visit from you and the U.S. cadetts [sic] at any hour you will please to designate.  Mr. Shaw will have the honour to deliver this and to receive from you your commands.  I have the honour to be with the highest esteem for the establishment at West Point for its officers and the young gentlemen the cadetts [sic],  Sir your most obedient and most humble servt, John Adams”. 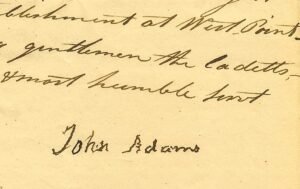 There is a contemporary docket on the bottom of the letter that states: “The above is in answer to a letter from the commanding officer desiring that the corps might be allowed to pay their respects to President Adams, at such time as would be least inconvenient to him.”

A U.S. military academy was first proposed by George Washington in 1783, but another two decades would pass before the United States Military Academy officially opened in March of 1802, at West Point, New York. During its first fifteen years, internal conflicts and inadequate staff plagued the military academy, but all that changed with the appointment of Sylvanus Thayer (Class of 1808) as superintendent in 1817. Following the example of famous French artillery and engineering schools, Thayer dramatically revamped the school, combining officer training with a highly technical undergraduate education. Under his watch, West Point quickly became America’s national engineering school, and engineering became the army’s most elite branch of service. More than just an officers’ training school in its early years, West Point also served as the nation’s major source of civil engineers and of engineering educators (West Pointers promoted science and engineering at, among other colleges, Cornell, Harvard, and Yale). Additionally, in the first half of the 19th century, West Pointers led many of the expeditions westward; they surveyed and mapped the land, identified potentially valuable resources, collected specimens, and established military posts that often became the nucleus of towns and cities. Whether as officers or civilians, West Point graduates built America’s roads, canals and bridges, laying the groundwork for America’s economic development, intellectual growth, and territorial expansion.

The importance of such a national institution was not lost upon John Adams, who, like Washington and Hamilton, sought to eliminate America’s reliance on foreign engineers and artillerists. His response to Major Worth’s query was quickly answered, less than a week later the cadets (who had marched from West Point and were encamped on the Boston Common) presented an extended close quarter drill for him and the assembled crowd of Bostonians at his Quincy home. Following which,  Adams gave a short speech on “the nature of glory” to the assembled West Pointers, admonishing them to follow the example of George Washington by placing national good over personal aggrandizement.  A wonderful item, especially for the West Point graduate, military historian or Presidential collector. 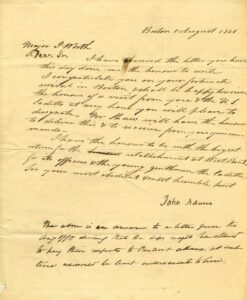