GARFIELD, JAMES (1831-1881)   20th President of the United States; assassinated by Charles Guiteau, died September 19, 1881.   A magnificent and large Imperial Cabinet Photograph, depicting Garfield in a ¾ length pose, 1/2 profile – facing left, wearing a long suit coat, with his right hand positioned behind his back.  7 ½ x 13 inches overall.  Minor dings on recto, and mounting traces on verso.  Image by Napoleon Sarony of New York, with their studio imprint on the lower photographic mount.   This is an exceptional example of the state-of-the-photographer’s ‘art’ for 1880/81.  Very fine condition.  A very difficult image to find in this size, and would display wonderfully. 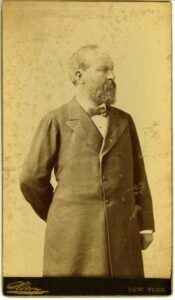