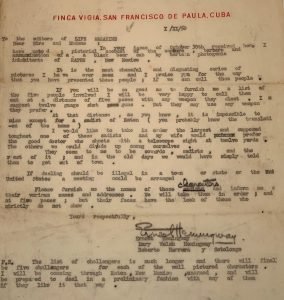 HEMINGWAY  —  HAVING READ, IN LIFE MAGAZINE, AN ARTICLE ILLUSTRATED WITH PHOTOGRAPHS OF A BEAR CUB BEING KILLED IN A MOST UNSPORTING MANNER,  CHALLENGES THE PREPERTRATORS OF THIS KILLING TO A DUEL!

“Dear Sirs and Madams :   In your issue of October 30th received here have noted a pictorial account or the capture, torture and assassination of a  black bear cub by certain photogenic inhabitants of RATON , New Mexico. It is the most shameful and disgusting series of pictures I have ever seen and I praise for the way that you have presented these people; if we can call them people. If you will be so good as to furnish me  a list of the five people involved I will be very happy to call them out at a distance of five paces with any weapon they elect.  I suggest twelve guage shot  guns.  But they may use any weapon they prefer.

At that distance, as you know, it is impossible to miss except for a sadist of Raton  (you probably knew the translation of the name).  I would like to take in order the largest and supposed toughest one of these sadists and my wife would prefer the good doctor who shoots with a telescope sight at twelve yards. The others we could.divide up among ourselves. They seem to me to be cowards, sadists, and the rest of it and in the old days we would have simply told them to get out of town. If dueling should be illegal in a town or state or the United States a meeting could be arranged. Please furnish me the names of these characters and inform me of their various names and addresses.  We will take them in order; and at five paces; but their faces have the look of those who strictly do not show. Yours respectfully,

P.S. The list of challengers is much longer and there will finally be five challengers for each of the well pictured characters.  I will be comeing [sic] through Raton, New Mexico, unarmed, and will be prepared to deal in a preliminary with any of them if they like it that way”.

A ‘defining’ Hemingway letter, that is just superb, and worthy of inclusion in the finest of literary collections!