IBSEN’S INSCRIBED BOOK PRESENTATIONS ARE OF GREAT RARITY.    Not one is recorded at auction since 1975, with only a handful of letters and documents, with mostly signed photographs show as being offered.

IN OUR RESEARCH, NO COPY OF THIS BOOK, INSCRIBED OR NOT, HAS BEEN RECORDED AT AUCTION.

The WorldCat.org’s, OCLC, shows only 2 copies of this book in the US, one in the UK, and 2 in Europe, and thus we conclude that this book presents possibly a unique opportunity to acquire an Ibsen rarity, not likely to be duplicated!  One of our: “The Best of the Best.”™ 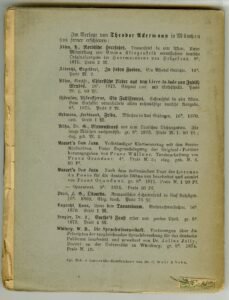 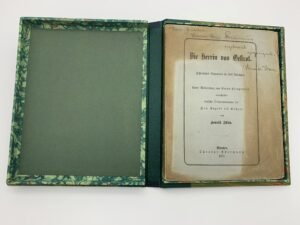 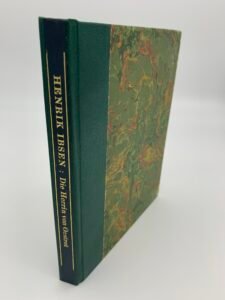 Lady Inger of Ostrat is an 1854 play by Henrik Ibsen, inspired by the life of Inger, Lady of Austraat. The play, the third work of the Norwegian’s career, reflects the birth of Romantic Nationalism in the Norway of that period, and had a strongly anti-Danish sentiment. It centers on the Scandinavia of 1510–1540 as the Kalmar Union collapsed, the impacts of the Reformation were becoming evident in Norway, and a last desperate struggle was being mounted to maintain Norwegian independence. Its initial sentiments were so strongly anti-Danish that Ibsen ultimately toned them down.  Goodreads.com

Mark Sandberg, Professor of Scandinavian literature at Berkeley has written: “Fresenius, August: dramatic author and occasional adapter and translator of French works, born March 5 1834 in Frankfurt am Main, lived from 1860-67 mostly in Paris in the study of French literature and especially French theater, and moved in 1868 over to Munich. I assume that is where he would have met Ibsen.”