ILLUSTRATED WITH AN INK SKETCH OF A STORK

FOUJITA, LEONARD TSUGUHARU.  (1886-1968)   Japanese–French painter and printmaker born in Tokyo, Japan, who applied Japanese ink techniques to Western style paintings;  has been called “the most important Japanese artist working in the West during the 20th century”;  he achieved great fame as a painter of beautiful women and cats.    Scarce Autograph Letter Signed, “Leonard Foujita”, in French on the back of a picture postcard bearing an image of Foujita’s “La Vierge à L’enfant.”  October 4, 1967.  With a small illustrated stork at lower left accomplished by Foujita.   He writes:

” My dear beautiful Gajou  —   I was happy to get your lovely letter at the clinic, and I have been back since March 29 yet at home for only two days, but I am leaving tomorrow for the Zurich Kanton Hospital and I have to stay there three weeks. That is why we have to wait until later in May to get together.  Sorry about my answer. Leonard Foujita”

Foujita would die from cancer, in Zurich, just 10 weeks later.  A charming letter for the collector. 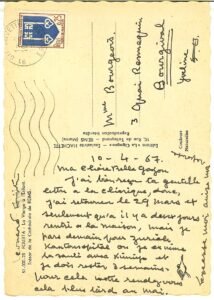 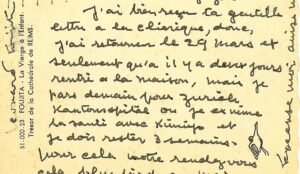