COPY # 7 OF THE LIMITED SIGNED EDITION

EINSTEIN, ALBERT (1879-1955) Theoretical physicist. The book: Albert Einstein: Philosopher-Scientist, boldly Signed on the limitation page “Albert Einstein 49.” Copy 7 of 760. [The first 10 copies were reserved for special presentations.] The Library of Living Philosophers, Evanston Illinois.  Small quarto, top edge gilt, 779 pages,  1949.  Additionally inscribed and signed on half title page by Paul Arthur Schilpp [the editor]: “To Dr. Barnaby C. Keeny, and the National Endowment for the Humanities, with the sincere gratitude and appreciation of Paul A. Schilpp. Summer 1969”.  [Keeny was previously President of Brown University, and under his leadership saw some of Brown’s largest expansions.]   Chocolate brown leatherette covers with gilt lettering, in excellent condition. This copy does not have the frontis portrait of Einstein, nor does it appear to ever have had one, as the pagination is complete, with many pages uncut, unread, and unopened.  Original brown board slipcase as issued.

AN OUTSTANDING ASSOCIATION COPY OF AN ESSENTIAL EINSTEIN ITEM, AND AN IMPORTANT BOOK IN THE EINSTEIN CANON.

The seventh volume in “The Library of Living Philosophers” series, Albert Einstein: Philosopher-Scientist is a tribute volume with essays by some of the most important scientists of the era reflecting on the importance of Einstein’s work. Contributors include: Wolfgang Pauli, Louis de Broglie, Max Born, Arnold Sommerfeld, Georges Lemaitre, Kurt Gödel, and many more. Of special note is the essay by Niels Bohr, “Discussion with Einstein on Epistemological Problems in Atomic Physics”, which gives Bohr’s perspective of the famous Einstein-Bohr debates. As Paul Schilpp notes in his Preface, “These recollections of conversations with Einstein on the epistemological aspects of physical science would never have come into being, were it not for the peculiar nature of this series.”

(Science, 21 April 1950) called this book a: “most important and significant volume. It is most difficult to get scientists to write simply and clearly about the fundamentals of their science and the leading philosophical ideas that guide them… In this book there is played out a great scientific drama of the last two decades…The book starts with an intellectual autobiography by Einstein himself. He satirically calls it his obituary. I know of no other to compare with it. Neither Newton nor Maxwell nor any of the other great giants of physics had his Schilpp [the editor and our presenter] to catalyze such an effort. After reading Einstein’s article one realizes the great loss this is to scientific culture”.

A ‘must have’ for any serious collector of Einstein. 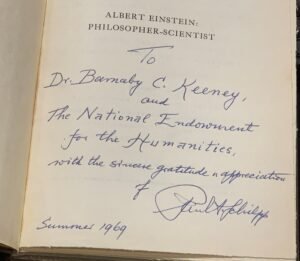 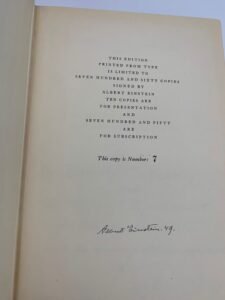 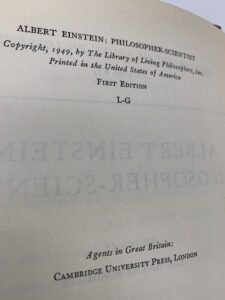 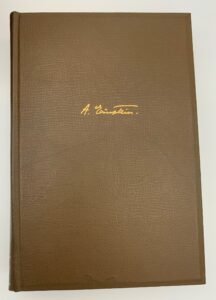