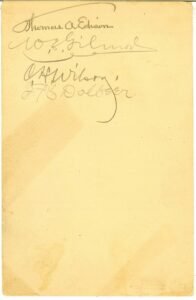 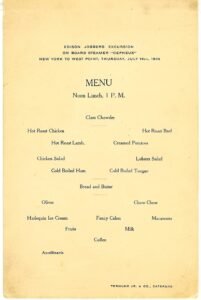 EDISON, THOMAS A. (1847-1931) American inventor of the light bulb. His bold ‘umbrella’ signature, “Thomas A. Edison,” in pencil, on the verso of an octavo menu for an:  “Edison Jobbers Excursion on Board Steamer ‘Cepheus’ New York to West Point, Thursday,   July 19, 1906” luncheon.  Also signing the menu are:  William E. Gilmore, President and General Manager of the National Phonograph Co. and the executive head of the other Edison Companies;  C. H. Wilson, General Manager of sales of National Phonograph Co.; and Frank K. Dolbeer, Credit Manager of all companies.  Very fine condition.  The first time we’ve encountered this particular item, and thus a rather scarce Edison ephemeral item.

William E. Gilmore was the éminence grise behind Thomas Edison and the Edison Manufacturing Company, a tough and frequently bullish character who had as great an influence as any on the nascent American film industry. Gilmore was appointed vice president and general manager of the Edison Manufacturing Company on 1 April 1894, taking over from Alfred O. Tate. For his very first act, Terry Ramsaye surmises, Gilmore ‘brought down a hard fist on a surprised desk and demanded action’. It became Gilmore’s task to oversee the increasingly complex exploitation of Edison’s business interests, which meant much else besides film, and indeed Gilmore had been employed in the first instance to tackle the problem of the financially unstable North American Phonograph Company, licensees for the Edison Phonograph. It was replaced by the National Phonograph Company, with Gilmore as its president. On the film side Gilmore soon became suspicious of W.K-L. Dickson, who while still in Edison’s employ was working in secret for the Lathams, and engineered the latter’s departure from the company in April 1895. By this act Gilmore did much to give birth to the many different cinematographic machines and subsequent patent litigation that was to keep himself and Edison fully occupied for years.  https://www.victorian-cinema.net/