“SOME GENTLEMEN ACT AS IF THEY THOUGHT A LARGE STANDING ARMY, IN TIME OF PEACE, NECESSARY FOR THE DIGNITY OF OUR MAGNIFICENT EMPIRE.  BUT THE REAL DIGNITY OF A NATION CONSISTS IN THE WISDOM OF ITS RULERS, AND THE VIRTUE AND HAPPINESS OF THE PEOPLE”.

PICKERING, TIMOTHY. (1745 – 1829) American statesman and politician; Secretary of State under Presidents George Washington and John Adams (1795-1800); Secretary of War (1795); Post Master General (1791-1795); strong proponent of Great Britain, and after a quarrel with President John Adams over Adams’ plan to make peace with France, Pickering was dismissed from office in May 1800; Pickering challenged Jefferson’s Embargo Act and held several conferences with the special British envoy George Rose and proposed the creation of a pro-British party in New England, which placed him in violation of the Logan Act, for which he was censured.  Exceptional Autograph Letter Signed, “T. Pickering”.  4 very full pages, quarto.  Werham, Massachusetts, January 29, 1819.  To Charles F. Mercer. [(1778-1858)  Virginia  politician and representative.] Pickering writes:

“Dear Sir, I read so few newspapers, that I see but a small portion of public transactions. I recollect, however, observing on introduction from you, that you should move for striking off one of the two Major Generals, chiefly, it would seem, to get rid of a military despot: but at the same time you suggested that you did not contemplate ~ reduction of the army.

Immediately after the peace, the army was reduced from the war establishment. I intended to propose (& if I rightly remember had draughted a resolution) to reduce it to 5000: but Mr. Deska forestalled me, by proposing to reduce it to 6000. Corning, as it did, from so promising a quarter, I readily closed with this motion, or resolution, & supported it. I then made a list of all the posts, allowed them competent garrisons in time of peace, and a thousand to be stationed on the first high and healthy ground, above New-Orleans (independently of a sufficient standing garrison there) to be ready to push down the Mississippi, in a very few days, whenever the security of the city should require it.· And after~ this distribution, a considerable part (I forget how many) of the 6000 remained unappropriated: so that 6000 was an ample force for all necessary purposes. In the Senate, however, their views are very different – and in my opinion, very extravagant. The result was a compromise between the two houses (or leading members who had the management) for the establishment as it has since existed.

It is near two years since a good deal of conversation took place, among members of the House of Representatives, with out reducing that establishment. I recollect conversing with Mr. Calhoun on the subject; and he, I perfectly well remember, admitted that an army of five thousand men was sufficient for the peace establishment, but said the session was so near its close, it would not be practicable to mature and pass a bill. That was true – considering how much discussion it would give rise to.

Give me leave to present to you my views of the subject, at that time.

On the whole northern frontier, eastward of Detroit, we did not, rant any fortresses, and consequently not any soldiers; and at Detroit no more would be required than the neighborhood of several Indian tribes would render prudent to be there stationed. – Of what use are all the other military posts? Suppose another war with Great Britain — will the British Invade our country on the side of Canada? For what end? To keep possession of what they march over? No one can imagine it. To ravage and lay waste the country? They are not Barbarians, and the certainty of severe retaliation would stay their hands. If we had no fortresses on that frontier, there would be no object or motive for an attack.

When General Swift, the Chief Engineer, accompanied Monroe on his Eastern Tour, I seized an opportunity of conversing with him on this Subject: He at once admitted the correctness of my opinion; with the single exception of one place, somewhere on Lake Champlain, or near it – which he deemed important to facilitate our entrance into Canada. I presume this is the very position we have been fortifying the past summer, and which, it is suggested, will fall within the territory of Great Britain.  – Of the importance of this post fe·r the object mentioned by Genl Swift, I cannot pretend to decide: I never saw that country, and if I had seen it should hesitate in opposing my opinion to General Swift’s. But looking forward a few years, when that part of New York will be cleared and settled, & many roads opened t'”‘ the Canada line, I had supposed there were several places, between Kingston & Montreal, where an army would find an easy passage into Canada. It could also be entered from the northern part of Vermont, and at a moderate distance from Montreal. – Hence it may be inferred, that no armed vessels will be needed on any of the lakes. And it was my opinion, that the interest of the United States would have been promoted, if at the moment peace took place all our armed vessels on Erie, Ontario & Champlain had been burnt – excepting such of the smaller ones as would be saleable to our citizens for the purposes of trade. Especially this measure would have been economical, by saving the expense· of laying them up and guarding, for having been built of green timber, and lying in fresh water, they would all be rotten, before another war would be likely to occur. And as for the huge Leviathan, on the stocks at Sacket’s Harbour, & which, I have understood, had been covered in, at a vast expense.  I dare venture to say it will never be launched.

Perhaps a direct reduction of the army may not be just now obtainable; – for some gentlemen act as if they thought a large standing army, in time of peace, necessary for the dignity of our magnificent empire. But the real dignity of a nation consists in the wisdom of its rulers, and the virtue and happiness of the people. Some feel reluctant to disband a body of officers: but it would be infinitely better to put them on half pay for life than keep up a large body of useless troops. If a reduction to five or six thousand men cannot be effected – a prohibition of enlisting and commissioning new recruits & cadets would work a gradual reduction. — Populous as the United States now are, with their daily rapid increase, there will always be enough ready to enlarge the army to any size, in a shorter time than any European nation would find necessary for preparing to attack us. But in our remote situation, what nation of Europe will ever even dream of invading the U States? As then we have nothing to fear and, if there be any danger now less than ever from the recent measures of the of the great allied powers), why not reduce the army at once? A very few men, artillerists, would suffice for the few important fortresses on the sea board, and a few rifle corps on the Indian frontiers.

It may be very convenient to New York to have fine military roads made on her northern border _ and no little parade has been exhibited for what Genl Brown’s army performed in that way – to sooth the nation into acquiescence in maintaining a useless body of troops. One fourth – probably one eighth of the expense of their establishment would have accomplished as much. “A well disciplined militia” – as the palladium of liberty. is an empty phrase in the mouth of every patriot. Excepting in Switzerland, such a thing has never existed, and there it has fallen to nothing. In New England will now be found the best in the U States. And yet I do not hesitate to say, that if an invasion were to be apprehended, a competent number of the militia embodied, would acquire more knowledge of arms & maneuvering, in one or two weeks, than in training from 18 to 45 years of age, 4 days in a year – at an incalculable expense of time – which is money. Let the militia be regimented, and assemble one half day in a year for the inspection of arms, and, if you please, firing at march.  All beyond this is a waste of time. The Swiss, never appointed their General officers, until war impended. A multitude of ours, such by rotation, must always be incompetent.  Respectfully yours,       T. Pickering

P.S. I may have the pleasure of seeing you in February.”

During the War of Independence, Pickering primarily played an administrative role, though he did lead the Essex County militia to block the British retreat after the Battle of Concord. In 1777, General Washington appointed Pickering Adjutant General of the Continental Army, and the Continental Congress elected him to the Board of War. Highlighting Pickering’s ability, General Washington described him as “a great Military genius, cultivated by an industrious attention to the Study of War, and as a Gentleman of liberal education”. Upon becoming President, Washington asked Pickering to negotiate and settle several treaties with Native Americans, notably with the Six Nations chiefs at Tioga in November 1790 and at Newtown Point in July 1791.  Washington then appointed him to the position of Postmaster General in 1791, where even in this role, Pickering continued to play an active part in negotiations with Native Americans, particularly in the 1794 Treaty of Canandaigua with the Iroquois Confederacy..  After briefly serving as Secretary of War [where he oversaw General Anthony Wayne’ negotiations for the Treaty of Greenville and the construction of the frigates United States, Constitution, and Constellation.]. Pickering became the Secretary of State in 1795, and remained in that office even after President Adams was inaugurated. As Secretary of State, he sympathized with Great Britain and in negotiations over Jay’s Treaty further hardened his anti-French views. He opposed the French in the “XYZ Affair,” and when the dispatches were published, he vehemently endorsed war with France. He was also an advocate of the Alien and Sedition Laws, and as the Federalists fractured, President Johns Adams accused Pickering of siding with Alexander Hamilton over himself.  Adams then dismissed Pickering from office in May 1800.

Near the end of his only term as a senator, Pickering challenged Jefferson’s Embargo Act and held several conferences with the special British envoy George Rose and proposed the creation of a pro-British party in New England and urged Rose to persuade British Foreign Secretary George Canning to maintain his hard line against America with the hopes that Jefferson would resort to even more extreme measures, which would ultimately effect a political suicide for the Republicans. Those undertakings placed Pickering in violation of the Logan Act and thus he was charged. Pickering also published his open letter to the Massachusetts Republican governor, which he refused even to read; it contained harsh criticism of the Embargo Act, claiming that Jefferson had presented no real arguments for its enactment, and called for its nullification by the state legislators. Pickering was charged with reading confidential documents in an open Senate session before an injunction of secrecy had been removed.   In response to that charge, the Senate censured Pickering by a vote of 20–7 on January 2, 1811. 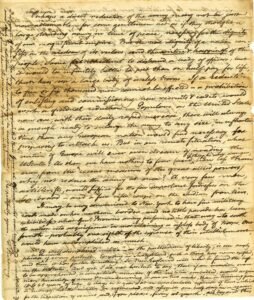