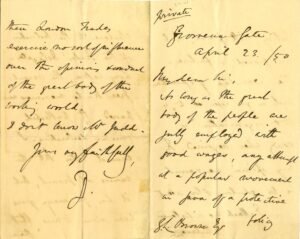 “THESE LONDON TRADES EXERCISE NO SORT OF INFLUENCE OVER THE OPINIONS AND CONDUCT OF THE GREAT BODY OF THE WORKING WORLD.”

“My dear Sir, as long as the great body of the people are fully employed with good wages, any attempt at a popular movement in favor of a protective policy, will prove, as it has proved, a failure.  The advantage of associations, such as you refer to, is that organization is ready when required.  In my opinion, we cannot be too sedulous or too silent.  I attach no importance whatever to the declaration of the Trades’ Delegates.  Long before the recent free trade measures were banned, they published similar declarations.  I cannot enter into the causes at present, but it has, for many years, been dear to me, that these London trades exercise no sort of influence over the opinions and conduct of the great body of the working world.  I don’t know Mr. Judd.  Yours very faithfully, D.”

A fine letter showing Disraeli’s opinion and attitude towards the trade movement and workers in mid-19th century Great Britain.