JOHN DALTON TO HIS FORMER SCHOOL MASTER, JOHN FLETCHER, THE PERSON WHOM ENCOURAGED DALTON’S EARLIEST INVESTIGATIONS AND HIS STUDY OF MATHEMATICS AND SCIENCE

“Esteemed friend John Fletcher, I feel much obliged to thee for thy kind remembrance of me, and in reply to thy letter may observe that the estate, as far as I can judge from the information, would be an eligible one for me did not the probable price of it exceed what would be prudent for me to engage with at the present time.  My establishment here requires a considerable portion of my property, and independently of it, I could not raise a disposable property much exceeding 2000₤; so that in all probability I should have to borrow 1000₤, which would be too large a proportion to be encumbered with on an estate of that value in the present uncertain state of the real value of landed property.  However, should the sale not take place at the time proposed, or be postponed, I should like to be informed, as it is not improbable my views may be modified after communicating with my brothers on the subject.

The decease of W. Harris was an event to me equally unexpected and melancholy.  I happened to have a line from P.H. about 6 weeks before, in which I observe he just mentions his brother’s circumstance so common in this reason as scarcely to excite attention.

I had heard of thy son’s marriage previously to the receipt of thy letter, and am glad of the present opportunity of congratulations there upon the occasion.  My knowledge of passing events both in Cumberland and Westmorland is very limited.  I have no regular correspondents in either country, nor do I see any newspaper from either, which is remarkable, all things considered.

We had a pleasant meeting at the Lit [Literary and Philosophical] Society here yesterday evening, when a paper was read by our friend Benj. Dockray, entitled ‘Result of the late excavations at Teresculum, near Rome, by the Principe di Canino, with remarks.’  … [a] version by an eye witness upon such classical ground would not fail to be generally interesting.  We had several strangers: one friend from Philadelphia; Mr. Bright, brother to one of the members for Bristol, etc.  I remain thy obliged friend,  John Dalton”.

The recipient of this letter, John Fletcher, was the Head Master at the Quaker school, called ‘Pardshow Hall’ where Dalton received his early education.  He took a liking to Dalton and inspired the young Quaker boy to take up solving mathematical problems, a skill he quickly mastered. This subsequently brought him to the attention of a number of people, including a rich Quaker, Elihu Robinson, who mentored him in mathematics, science and meteorology. The rest is history, and Dalton is considered one of the great scientific minds of the era.  Much of Dalton’s written work, collected by the Manchester Literary and Philosophical Society, was destroyed or damaged during the World War II bombing of Manchester, England,  on 24 December 1940, thus partially accounting for the scarcity of his written materials.  A fine, informative letter from one of the great pioneers in science. 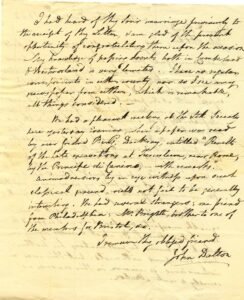