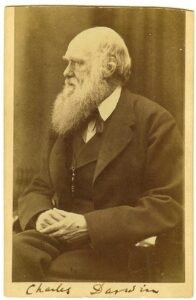 ALSO SIGNED ON THE VERSO BY CONTROVERSIAL PHOTOGRAPHER OSCAR REJLANDER, WHO TOOK THIS CDV IMAGE AND WHOSE PHOTOGRAPHS ILLUSTRATED DARWIN’S THE EXPRESSION OF THE EMOTIONS IN MAN AND ANIMALS

DARWIN, CHARLES. (1809-82). British scientist and founder of evolutionary theory.  Superb and Exceedingly-rare Signed Carte-de-Visite Photograph.  Darwin is depicted [in a clear 1st generation print], showing him seated in 1/2 length pose, facing right, with his hands clasped in front of him. Boldly signed on the lower margin, “Charles Darwin.” No place, [London]. No date  [circa 1871]. Also signed on the verso by OSCAR GUSTAVE REJLANDER (1813-  1875), the Victorian art photographer, who took this photograph: “O.G. Rejlander / 1 Albert Mansions, / Victoria Street S.W.”

We can not locate any other image of Darwin being signed by them both. Housed in a custom made, gilt-imprinted, leather spine, clam-shelled case.   A simply wonderful, and exceedingly rare signed photograph, combined with the outstanding association of two colleagues whose works were the center of much controversy during, and even subsequent to, their lifetimes!  One of our “Best of the Best”.™ 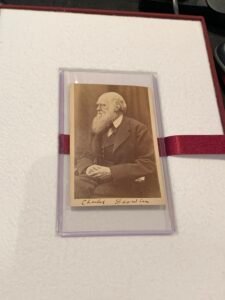