JACKSON, ANDREW.  (1767-1845).  Seventh President of the United States (1829-1837).  Partially-Printed scalloped edge ship’s paper Signed, “Andrew Jackson,” as President.  [His signature is big and bold and measures over 6 inches in length].  One page, folio, vellum.  No place. [Washington, D.C.] July 5, 1834.  Countersigned by LOUIS MCLANE, as Secretary of State, and Lemuel Williams as Collector of the port. With ornate wax paper wafer SEAL OF STATE affixed at lower left, displaying the American Eagle, wings spread.  Attractive vignettes of a lighthouse overlooking harbor and a ship at sea, at top.  The document reads:

“By the President of the United State of America Suffer the Ship John of New Bedford Andrew Murry master or commander of the burthen of 307 & … / 95 tons or thereabouts mounted with n guns navigated with 24 men To pass with her Company Passengers Goods and Merchandize without any hinderance [sic] seisure [sic] or molestation the said ship appearing by good testimony to belong to one or more of the citizens of the United States and to him or them only. Given under my hand and the Seal of the United States of America the 5 day of July in the year of our Lord one thousand eight hundred and thirty four.   Andrew Jackson. By the President Louis McLane Secretary of State, State of Massachusetts District of New Bedford Countersigned by Lemuel Williams collector” 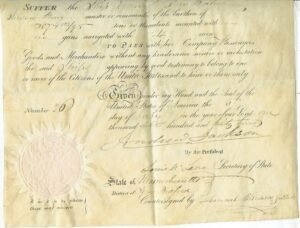 These ships passports make superb display items, and the condition of this one is very much above average!