“Sir, Your Excellency’s letter and the papers accompanying the same—relative to the conduct of Capt. Reily—was immediately upon the receipt thereof submitted to Congress.  Upon a reference to the Secretary of Foreign Affairs the inclosed report was made—but Congress having declined acting thereon the delegates can only make this communication for your Excellency’s information and remain with esteem and respect Sir your most humble servants, Nath. Gorham, Rufus King, Nathn. Dane”

In June of 1786, Nathaniel Gorham succeeded John Hancock as the President of the United States Congress Assembled. Subsequently, Gorham went on to serve as one of the Massachusetts delegates to the United States Constitutional Convention. As Chairman of the Convention’s Committee of the Whole, it was Gorham (not the President of the Convention, George Washington) who presided over a great deal of the drafting process before he proudly signed the U.S. Constitution that he helped shape. In addition to the signature of this influential Founding Father, our document is countersigned by Rufus King, a member of the Convention’s Committee of Style, the body charged with overseeing the rhetoric of the U.S. Constitution, and Nathan Dane, a Massachusetts delegate to the Continental Congress who, though he opposed the final draft of the U.S. Constitution, played a major role in the expansion of the United States into the Northwest Territory while also prohibiting slavery there.  He also helped fund Harvard’s Law School.

In addition to bearing the signature of these three influential early American leaders, our letter makes reference to the abhorrent conduct of one Captain Reily, commander of a passenger vessel that sailed from Dublin on March 17, 1786. According to the Journals of Congress, during the passage Reily treated some of his 100 passengers so poorly “as to occasion their Deaths.” Moreover, Reily, citing a lack of sufficient provisions, left 90 of his surviving passengers at a remote location in Massachusetts. After learning of these events, Gov. John Hancock requested that the Congress intervene in the matter. That governing body, while noting the heinous nature of the charges against Captain Reily, found no precedent for intercession. Instead, as our letter shows, the still nascent legal system of the United States left the apprehension and trial of the accused firmly in the hands of the state governments involved. 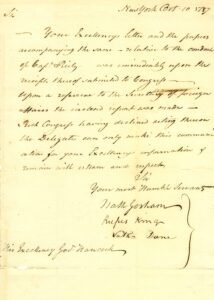