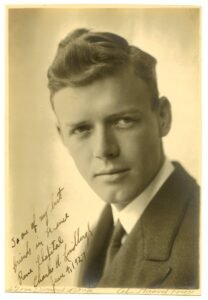 LESS THAN 2 WEEKS AFTER CROSSING THE ATLANTIC, SOLO, FOR THE VERY FIRST TIME, DEDICATES A PHOTOGRAPH TO THE HOSPITAL WHERE HE WAS TAKEN FOR A CHECK UP AFTER LANDING AT LE BOURGET AERODROME JUST OUTSIDE PARIS!

LINDBERGH, CHARLES A. (1902-1874). American aviator, military officer, author, inventor, and activist; First aviator to complete a solo transatlantic flight, which he did in his plane, Spirit of St. Louis.  An absolutely Superb vintage sepia-toned, octavo Photograph Inscribed, on the photographic surface to the lower left of his image: “To one of my best / friends in France, / [the] Rene L’hopital. / Charles A. Lindbergh, / June 4, 1927”.  Lindbergh is depicted in a full-faced, bust pose as he looked when he first crossed the Atlantic just days before!   Image by “G.L. Manuel Freres  / 47 rue Dumont d’ Orville” with their imprint on the lower margin of the photographic surface.   [This photographic studio founded by brothers Gaston and Lucien Manuel, thus the G and L].   Excellent condition.

At the Le Bourget Aerodrome in Paris, tens of thousands of Saturday night revelers had gathered to await Lindbergh’s arrival. At 10:22 p.m.  May 21st, local time, his monoplane slipped out of the darkness and made a perfect landing at the air field. The crowd surged on The Spirit of St. Louis, and Lindbergh, weary from his 33 1/2-hour, 3,600-mile journey, was cheered and lifted above their heads. He hadn’t slept for 55 hours. Two French aviators saved Lindbergh from the boisterous crowd, whisking him away in an automobile. [wikipedia] Rene Hospital was only 4 miles away.  He was an immediate international celebrity, celebrated to this day.

This photograph is NOT one of the many later reproductions, nor is it one of the many forgeries of his items that are found in the collectibles  market, supposedly ‘signed’ in black India ink, with the attempt to produce a ‘keepsake’ of this level of desirability. This photograph is an absolutely choice item that captures the intensity of the whirlwind moment that surrounded the event in the very immediate days after its accomplishment!  A fabulous item for the serious collector of flight and aviation related material.