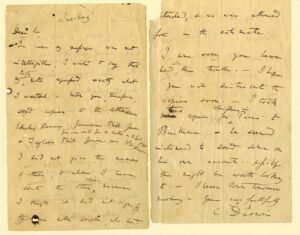 CHARLES DARWIN SENDS COPIES OF THE THIRD VOLUME OF HIS:

THE VOYAGE OF THE BEAGLE

“In case my message was not intelligible, I write to say that my last note expressed exactly what I wanted.  Will you, therefore, send copies to the Athenaeum Edinburgh Review Jameson this Journal and Taylor this Journal. You can write from the author on the first page if you please.  I did not give the names of those, to whom I have sent the other copies, because I thought it did not signify, they [were] either people who had materially aided me or foreigners, who I thought by noticing the work, would aid its sale.  The four copies sent for private friendship you say you have charged to my private account, which is all right.  So 21 copies (instead of 20 as originally proposed, the change caused by the addition of Silliman) have been sent gratuitously, and this is exactly as I always intended, and as was allowed for in the estimate.  I am sorry you have had all this trouble.  I hope you will distribute the copies soon.  I took two copies for societies in Paris to Baillière and he seemed inclined to send some on his own account: possibly this might be worth looking to.  I leave town tomorrow morning.  Yours very faithfully, C. Darwin.  [P.S.] The copy for Dr. Allan of Forres in Scotland, might be sent to Edinburgh and then forwarded (if there be any difficulty on this lead) by coach, he paying the carriage.”

Having just published his Voyage of the Beagle in 1839, Darwin requests that copies of its third volume, Journal and Remarks 1832-1836, be sent to the editors of numerous respected British and American scientific journals, including Robert Jameson of The Edinburgh New Philosophical Journal, Richard Taylor of the London Edinburgh, and Dublin Philosophical Magazine and founder of the Annals of Natural History, and Benjamin Silliman Sr., Founder and first editor of the American Journal of Science and Arts. Copies were also sent to Dr. J. Allan, whom Darwin cites a number of times in his The Structure and Distribution of Coral Reefs (1842), and Jean Baptiste Marie Baillière, a bookseller with offices in Paris, London, and New York who would later publish some of Darwin’s books in French.  It was with the research for The Voyage of the Beagle, a work that Benjamin Silliman felt was “not second in interest and instruction to any work of the kind I have ever read,” that Darwin began to formulate the theories of evolution and natural selection realized in his master work, The Origin of Species.