MARY CASSATT DISCUSSES THE GREAT ART COLLECTOR HAVEMEYER  ~~         A PROPOSED PROJECT TO CATALOGUE THE GREAT COLLECTIONS, HER RELATIONSHIP WITH HER PARIS ART DEALER DURAND-RUEL, AND THE REASONS SHE CAN’T SELL HER CORRESPONDENT A PAINTING

CASSATT, MARY.  (1844 –1926). American painter and printmaker who exhibited with the Impressionists; lived much of her adult life in France where she befriended Edgar Degas; Cassatt often created images with a particular emphasis on the intimate bonds between mothers and children; described by Gustave Geffroy as one of “les trois grandes dames” (the three great ladies) of Impressionism alongside Marie Bracquemond and Berthe Morisot.  Good Autograph Letter Signed, Mary Cassatt, on her imprinted black-bordered mourning Mes Nil Beaufresne / Mensil-Theribus (Oise) stationery.   Four very full pages, large octavo.  “Dimanche”, no date, but June, 1912.   To an unnamed gentleman.  The Impressionist artist writes:

“Sir,  I thank you for your letter. I will send you word as soon as I have seen Mr. Stillman.  He is to have lunch here today.  I am writing today to talk to you about Monsieur Jaccaci  [August Jaccaci 1856-1930] –  who is going to see you or write to you on the subject of a publication that he is working on about the collections in America. It’s a very big deal that he had to suspend for a while, but he has picked it up now, having found funders. He has already had articles by writers in Paris, and when I told him about you, he said that he would look you up. Strictly between us, he does not like my paintings at all, but since I have work in the collections of mutual friends, he must have articles about my paintings. My friend Madame Havemeyer did not want for her collection to be talked about, nor does Monsieur Stillman, maybe [they] believe that I was thinking of getting them involved. In any case, he is a serious man and very honest.

As far as the sketch goes that you saw here, I believe I gave you the wrong impression of my business relations with Monsieur Vollard and what he has of mine that he bought six or seven years ago. At that time, the Durand-Ruels didn’t care for the sketch by me. Since then, all has changed, and since I am contracted with them, I don’t have the right to sell to others. But as for the sketch itself, I don’t want to sell it. It is the only thing in painting that I own, and since it is quite possible that I will not recover my health enough to work, it will be the only souvenir for my family.  Otherwise I would gladly have given it to you. I could not sell it.  Please accept my sincere best wishes, Monsieur.  Mary Cassatt”.

This letter is just full of exceptional insight into the workings of Cassatt’s involvement with the Impressionist movement and art scene in Paris of that era.  Jaccaci and the painter John La Farge were editors for what they hoped would be a multi-volume series to be called ‘Noteworthy Paintings in Private Collections’. The first volume was published in 1907, but with the untimely death of La Farge, Jaccaci abandoned the project.  The details of Cassatt’s relationship with Durand-Ruel is enlightening.  Evidently her contract precluded her selling any of her works, unless they were the agent for the sale.  She evidently could, however, gift her works.  Simply a superb letter of content and length, not often seen from this legendary woman Impressionist’s pen. 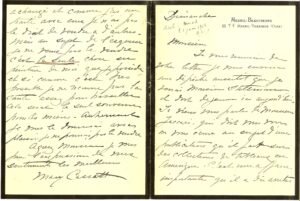