PRESIDENT ULYSSES S. GRANT STATES THAT: “IN VIEW OF HIS YOUTH… [AND] OTHER GOOD AND SUFFICIENT REASONS…I DO HEREBY GRANT [HIM] A FULL AND UNCONDITIONAL PARDON”

“Ulysses S. Grant, President of the United States of America. To all whom these presents shall come, Greeting: Whereas, on the 31st day of July, 1875, in the Police Court of the District of Columbia, one John Connors was convicted of assault and battery, and was sentenced to be imprisoned for ninety days; – And whereas, in view of his youth, – that this was his first offence, and that it was not of an aggravated character, the United States District Attorney recommends his pardon; – Now, therefore be it known, that I, Ulysses S. Grant, President of the United States of America, in consideration of the premises, divers other good and sufficient reasons me thereunto moving, do hereby grant to the said John Connors, a full and unconditional pardon. In testimony whereof I have hereunto signed my name and have caused the seal of the United States to be affixed. Done at the City of Washington, this 15th day of September, A. D. 1875, and of the Independence of the United States the one hundredth. U.S. Grant. By the President: Hamilton Fish, Secretary of State.” 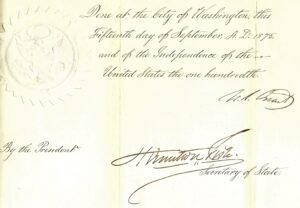