“Because of the temporary paralysis of part of my face, I have had to stay at home for the past two days. Yes, I wanted to return to the theater, but the chill of the air made it worse.

I am disconsolate about my indisposition which forces Mr Lepelliot[?] to substitute for me, despite all the other things he has to do. So I undergo highly energetic treatments with electricity. But on the orders of the doctor, I am afraid that it will be another five or six days before I can leave the house again.

I assure you, Sir, that my biggest preoccupation is not my illness itself, but the fear that the service will suffer.  If ever the piece [Poize?] should [?], I would like to ask you to tell me what day, and I will come and bring the theater papers and expedite all the service of the press and the authors.

So please, Sir, excuse my absence and know that I am dedicated to you,  Jules Verne”.

Really a remarkable letter in many ways.  The fact that Verne sought out medical treatments that involved electrical stimulation only goes to agree with the theory that Verne was a forward thinker, seeking the modern medical frontiers for treatment.   This letter penned nearly 10 years before his major literary successes, was written when he was still involved with the vaudeville stage.  Very fine condition. 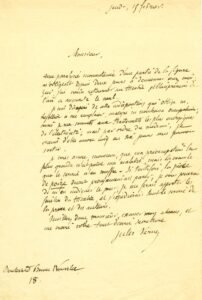