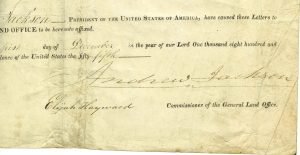 “The United States of America, To all to whom these presents shall come, greeting: Know ye, that, in pursuance of the provision of the 8th section of the Act of Congress, approved the 24th day of May, 1828m entitled ‘An Act to aid the State of Ohio in extending the Miami Canal from Dayton to Lake Erie, and the grant a quantity of land to said state to aid in the construction of the Canals authorized by Law, and for making donation of land to certain persons in Arkansas Territory,’ and of the other Acts making donations to settler in the said Territory, there has been deposited in the General Land Office a Certificate of the Register of Deeds at Little Rock in the said territory, numbered 17 whereby it appears that John Boutwell late of Lovely County Arkansas Territory has entered, conformably to the Acts of Congress aforesaid, the North East quarter of Section twenty seven, the South East fractional quarter of sections Twenty two, and the South west fractional quarter of section twenty three, north of Arkansas River, in the township five South …”