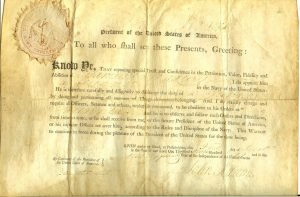 “Know Ye, THAT reposing special Trust and Confidence in the Patriotism, Valor, Fidelity and Abilities of Samuel Masury,  I do appoint him a Gunner in the Navy of the United States: HE is therefore carefully and diligently to discharge the duty of a Gunner … by doing and performing all manner of Things thereunto belonging.  And I do strictly charge and require All Officers, Seamen and others under his command, to be obedient to his Orders and Gunner, And he is to observe and follow such Orders and Directions, from Time to Time, as he shall receive from me, or the future President of The United States of America, or his superior Officer set over him, according to the Rules and Displine of the Navy.  This Warrant to continue in force during the pleasure of the President of the United States for the time being … John Adams”

In response to the threat posed to American merchant ships by French, British, and Barbary pirate vessels, the young American nation began to establish an armed maritime presence in the decades following the creation of the United States.  [At the end of the Revolutionary War,  the Continental Navy was disbanded.  George Washington,  realizing the threats to American merchant shipping by Barbary pirates from four North African Muslim States in the Mediterranean,  led him to approve the Naval Act of 1794, which created a permanent standing U.S. Navy. There were only six frigates originally authorized as part of the Act.]   Samuel Masury served aboard one of these early U.S. Naval frigates, the Essex, which was built in Salem, Massachusetts in 1799.  Before being captured by the British in the War of 1812, the Essex saw action in the Mediterranean Sea during the First Barbary War.  Usual folds.  Some minor toning, and light accomplishment, but not affecting Adam’s signature which remains strong and legible.