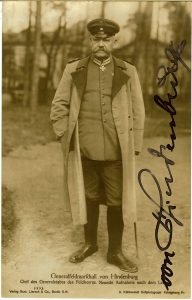 HINDENBURG, PAUL VON.   (1847-1934)   German field marshal, statesman, and politician; Despite being personally opposed to Hitler and the Nazi movement, he was nonetheless a major figure in the political instability that resulted in Hitler’s rise to power; Upon twice dissolving the Reichstag in 1932, Hindenburg ultimately agreed to appoint Hitler as Chancellor in January 1933, when the Nazis won a plurality in the November elections.   Attractive, vintage post-card Photograph Boldly Signed, “von Hindenburg” along the vertical right margin.  Hindenburg is depicted in a full length pose, dressed in his military uniform, standing outdoors.  Image by “A. Kuhlewindt Hofphotograph Konigsberg, Pr[ussia]”, with their imprint in the image.  Notation on verso, in German, in pencil states that the signature on front was written by Hindenburg.  Very fine condition.  Rather uncommon pose and format.