DAVY, SIR HUMPHRY. (1778-1829) 1st Bart, English chemist and inventor best known for his discoveries of several alkali and alkaline earth metals.  Lengthy Autograph Letter Signed “H. Davy”, with good scientific content.   Four very full pages, quarto. Hotel de la Paix, Paris, May 20, 1820.   Integral Stamp-less cover with postal markings and “Port Paye” cancellations.  Edges lightly toned and some chipping at edges with tearing,  in addition to a small hole from wax seal opening. To WILLIAM THOMAS BRANDE (1788-1866).   English Chemist, who studied medicine but his interests moved towards chemistry after meeting with Humphrey Davy.   He soon started lecturing on the subject in a variety of locations in London and in 1813 succeeded Davy at the Royal Institution where he established a lecture course for medical students. From 1823 Brande was also closely associated with the Royal Mint, becoming Superintendent of the Coining and Die Department in 1852at the Royal Institute in London.   Davy writes:

“It is long since I have written to you but unless I have something to communicate I do not like to trouble my friends; & in Italy unless issuing changes  upon my own such stock of scientific results I had nothing to state in the way of chemical or philosophic information. Here then is little going on which you will not have seen noticed in the parcels. A subject which seems to awaken much attention is the increase of temperature of the surface at considerable depths if the results can be depended upon & are not influenced by accidental causes to – prove that it’s a few miles below the surface the interior must be intensely hot of a temperature per – not produced in any of our arterial operations. The subject is at all events a very curious one & in its geological relations with a very minute investigation. Bard & Lady Spencer are here & will be here for some time – they –– gave  me a piece of news which I hope is incorrect but which makes us all very uneasy. It is that Sir Joseph is going to resign the chair of the royal society to Mr. Giddy Gilbert.  Pray write me a few lines & tell me if this is true. Feeling very much interested in the progress of Science in Gt. Britain & in the dignity of Scientific view & of the Royal Society.  I – deeply regret lack of reason, if it be in contemplation. Mr. Gilbert is a good natured man as far as personal services are concerned and possessed of a good stock of imperfection but he will never spend a farthing for Science or make a single sixpence for it & with him the chair of the Royal Society will be a stepping stone to honors which his parliamentary services can not obtain in his borough — parliamentary patron cannot from the way in which Bard Spencer excused himself   I have no doubt he would gladly accept the chair at the same time I did not put the question to him. But Bard Spencer, or the Duke of Somerset would at last give dignity & not meanness to the situation & my scientific Vice presidents might keep alive the scientific character of the Body.  Not even accept country gentlemen or members of the Society that are surely many who have higher claims than the person in question. Mr. Hatcock, Sir David Hume,   Sir Henry Englefield,  Sir John —,  Mr. Abraham Hume, Sir John Stanley, Dr. Wollaston, Wm. Herschel, Dr. Jenner.  Even annual elections of new presidents would be better than making the chair an appendage to a rotten Cornish —Pray write to me by return of post on this subject which I think is closest, a rational one.  I am since obliged to you for your manual which is the best collection & arrangement of chemical science existing. I have given the only copy I have received to —, who is going to publish immediately an Italian translation of it.  I preferred making it – to the progress of Science to keeping it for my own gratification. Lady Davy joins me in kind remembrances to Mrs. Brande. Believe me to the –Sir / Very sincerely yours, H. Davy.” 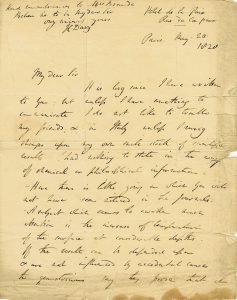